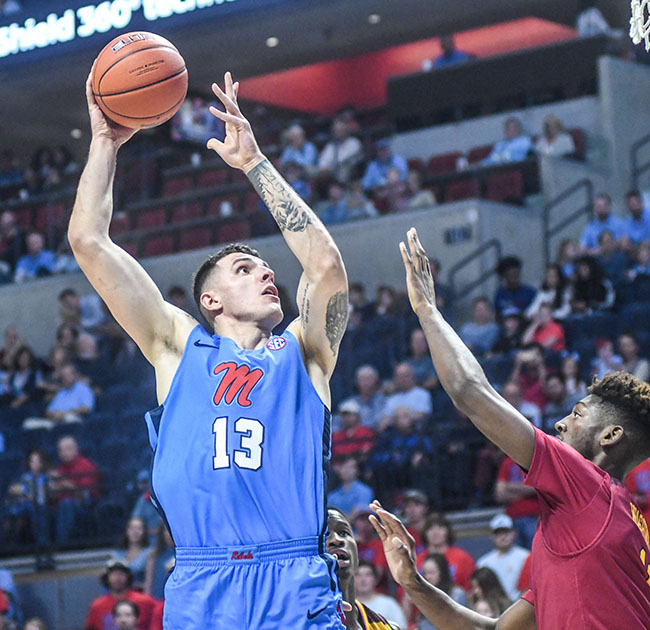 A true freshman at Drake University in Iowa, he played in 20 games, starting the final nine of the season. He then transferred to Ole Miss to play for Andy Kennedy. Due to transfer regulations, he had to sit out a season. Then last year happened; Kennedy’s bizarre departure led to the start of the Kermit Davis era for the Rebels.

Now, Dominik Olejniczak is playing for his third coach in four years. He’s finally starting to settle into his role with Ole Miss and the new coaching staff.

“I’m a junior now. I’m supposed to be a senior because I sat out one year. I have more confidence with the time because I’ve already been there,” Olejniczak said. “I’m just trying to do my role and help the teams win the game.”

Dom shares the starting center role with Bruce Stevens, starts alternating due to the practice points system Davis runs. Since the start of December, he’s settling in as a stable presence for the Rebels. Olejniczak has scored between seven and ten points in each of the five December games. However, for a 7-footer, he’s not posting the rebounding numbers the Ole Miss staff wants from their big men.

“Dom has made a lot of strides in areas, but the other night he had one rebound,” said head coach Kermit Davis. “He’s got to be able to go from one side of the rim to the other side of the rim.”

The concept Davis is talking about he calls out-of-area rebounds. The best big men in the country can box out their man, the disengage and pursue the ball. Olejniczak’s size and strength make him fantastic at boxing out, but he often struggles in the pursuit factor.

“I have to not worry so much about boxing out your guy. My guy probably isn’t going to get many offensive rebounds, because I’m going to box him out,” Olejniczak said. “But that doesn’t mean I can’t get the rebounds outside my area.”

Another thing Olejniczak has been working to do is become more well rounded offensively. He has a fantastic right-hand jump hook shot, but really that’s his only move. With his size, at 7-foot and 260-pounds, he can bully people and get to that right hand a lot against non-power-five teams, but entering SEC play, he’s going to need to be less one-dimensional

“He’s 100-percent predictable. We talk about it all the time. We’ll do drills today where he can only shoot with his left hand,” Davis said. “Really in basketball, you only need two moves: you best move and a counter. In practice he gets it done. I tell him ‘I don’t care if you miss it. I just want you to shoot a ball with your left hand.’”

To Olejniczak’s credit, the first play of last Friday’s win over Middle Tennessee, he tried to go left. However, he would turn the ball over doing so. He has just one game remaining in non-conference play before he starts seeing big SEC centers on a daily basis.