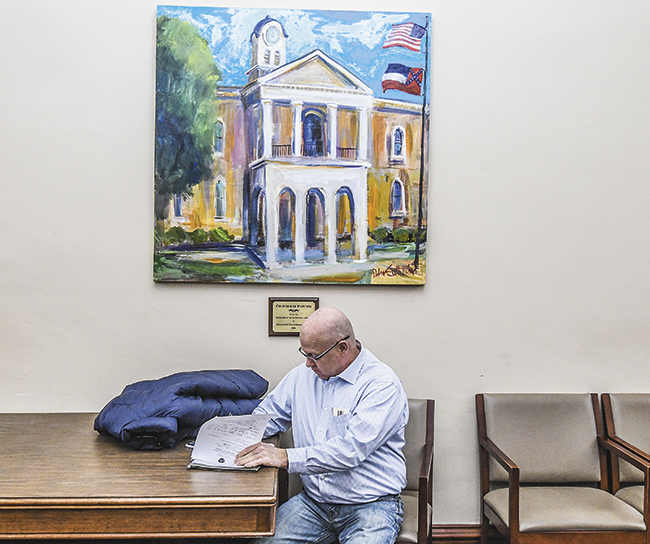 Jeff South fills out qualifying papers to run for sheriff, at the Lafayette County Courthouse in Oxford, Miss. on Wednesday, January 2, 2019. Wednesday was the first day to file paperwork to run for political office.(Bruce Newman, Oxford Eagle)

OXFORD — The first day of business in 2019 also marks the beginning of another election cycle for Lafayette County. The qualifying period officially began on Wednesday with candidates heading to the county courthouse to fill out paperwork for their respective races.

After announcing his plans to run for Lafayette County sheriff last month, Joey East made it official Wednesday morning by filing his name with the Circuit Clerk’s office. East will be trying to fill the position his father, F.D. ‘Buddy’ East, occupied from 1972 until his passing last September. East was the longest tenured sheriff in Mississippi.

The current Oxford Police chief will not be running unopposed. Jeff South of Como also filed paperwork to run against East in this fall’s election. South, who moved to Mississippi from Tennessee five years, lives north of Sardis Lake and pays Lafayette County taxes making him eligible to run. East is running as a democrat and South will run as an independent.

Current circuit clerk Baretta Mosley will not seek a third term, leaving the position open for a fresh face. Current District 2 county supervisor Jeff Busby announced his intentions to run for the office that his mother held for 24 years last month and filed the paperwork on Wednesday to make his campaign official.

A few county citizens filed to run for the board of supervisors on Wednesday. With Busby not running again for the District 2 seat Ava Halon Bonds Gossett, J.E. (Ed) Neilson and Larry Gillespie filed paperwork to vie for the open position. Brent Larson made his campaign for the District 1 seat official while Cynthia Parham filed for the District 3 seat.

The qualifying period for all 2019 elections ends on March 1.

Holiday arrests by Sheriff’s office down from last year