Lafayette girls dominate while boys fall at home to Grenada 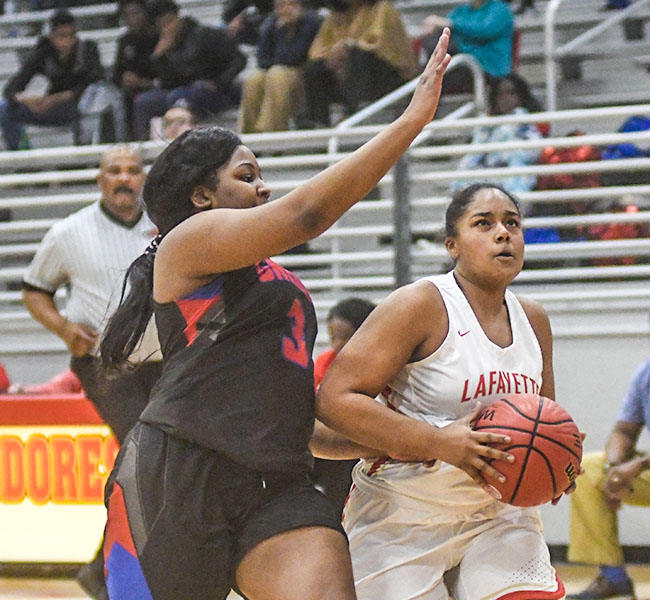 Dixon led the team in scoring, however Azariah Buford started the team off with a quick layup enroute. Buford, as well as Mariah Holland, also finished the game in double figures with 12 and 11 points, respectively.

The Lady Commodores were quick on defense in the first two quarters, as they jumped the passing lanes often and racked up steals and tipped passes, while only committing four fouls in the first half.

Lafayette went into the half with a commanding 30-16, but the ‘Dores third quarter start was sloppy. Committing turnovers and tossing sloppy passes on offense allowed Grenada to score a few quick baskets. However, Lafayette’s defense held firm as the trio of Buford, Dixon and Holland controlled the offensive pacing with fast breaks and on-target passing.

Dixon finished 9-14 from the floor for 20 points. Buford wasn’t as efficient, shooting 4-16 for 12 points, but she made her mark all over the stat sheet compiling multiple blocks and assists as well. Holland was the most efficient from the floor, shooting 5-7 for 11 points.

Next, Lafayette travels to West Point on January 11th to take on West Point HS.

While the Lafayette girls rolled against the visiting Lady Chargers, the boys struggled with their visiting Charger team.

The Commodores made their first basket of the game, a jumper by Leviticus Lott, but would miss their next seven shots as Grenada pushed out to a lead Lafayette couldn’t break into enroute to a 65-40 home loss.

Grenada (11-4, 2-0) opened nearly every quarter with a run that would push Lafayette (5-12, 0-1) further into a hole. The Chargers opened the first, second and third quarters with 6-2 runs, and Lafayette couldn’t keep up offensively.

Tylen Kinds was the ‘Dores’ highest scoring player, recording 10 points on 4 of 8 shooting. However, the next highest scorer was Kylen Vaughn, who had five points.

Of the 12 players that saw the floor Tuesday night for Lafayette, 10 scored at least one point.

Lafayette travels to West Point for its next game on January 11.