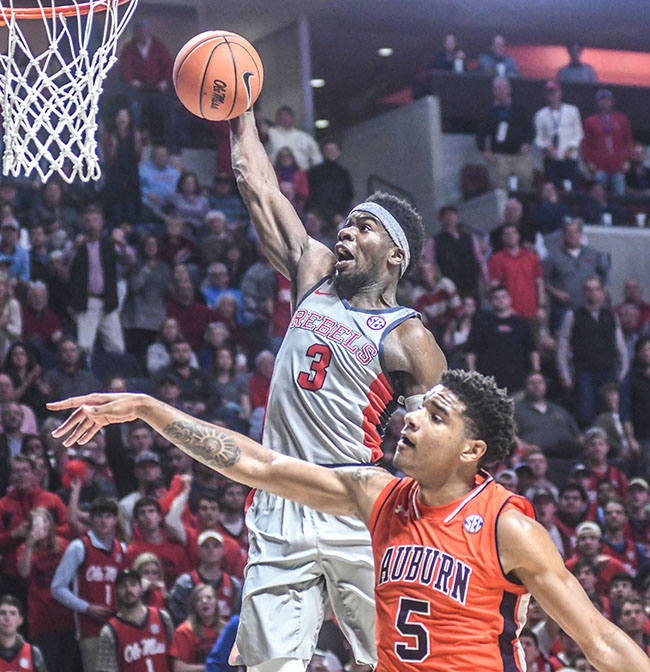 OXFORD – No one in The Pavilion needed a seat for the final two minutes of play Wednesday night, with Ole Miss upsetting AP no. 11 Auburn 82-67 in their home SEC debut. Oxford may not be a basketball town, but get used to hearing a lot more about Rebel hoops in coming months.

“It definitely felt (different),” said senior guard Terence Davis. “We don’t want to settle for mediocre. It’s a signature win, but we’ve still got a way to go.”

The first half started slow, neither team was able to establish their rhythm on the game. That quickly changed. Ole Miss took a game that was tied at nine after five minutes and blew it wide open. Terence Davis scored eight straight himself, as the Rebels would score 16 of the next 21 points. Auburn clawed its way back, but by the end of the first half, Ole Miss continued to increase the lead, closing the half on a 12-2 run to lead the #11 team in the country 42-29.

Despite the hot start, Ole Miss could not have opened the second half worse. They looked flat and lacked urgency, as Auburn scored the first seven and 11 of the first 13 points to start the half. Back to back buckets by freshman K.J. Buffen changed the tempo. The game went back and forth until Auburn’s center Austin Wiley picked up his fourth foul with 6:41 left. Ole Miss would go on a subsequent 9-0 run with Wiley on the bench, putting the game out of reach.

“The biggest thing I was proud of is we just responded to all of their runs. That’s what good teams do,” said Ole Miss head coach Kermit Davis. “Just really really happy for our players, beating an awfully good team tonight.”

“The biggest stat for us is the rebounding. They’re one of the best offensive rebounding teams in the country,” Davis said. “Plus eight is terrific for us.”

Ole Miss was led in the game by Terence Davis, who’s 17 first half points carried the team through leading-scorer Breein Tyree’s off night. Davis would finish with 27 points and 12 rebounds. Freshman K.J. Buffen had his best game as a Rebel, scoring 16 points. Senior guard Bryce Brown led the way for Auburn with 23 points, including seven made three pointers.

It’s a difficult stretch for Ole Miss, taking #11 Auburn Wednesday before heading to Starkville on Saturday. They will face no. 14 Mississippi State at noon with the rivalry game televised on CBS. The attendance of 8,241 was the largest of the Kermit Davis era.