Football coordinators introduced: what to expect from Mike MacIntyre and Rich Rodriguez 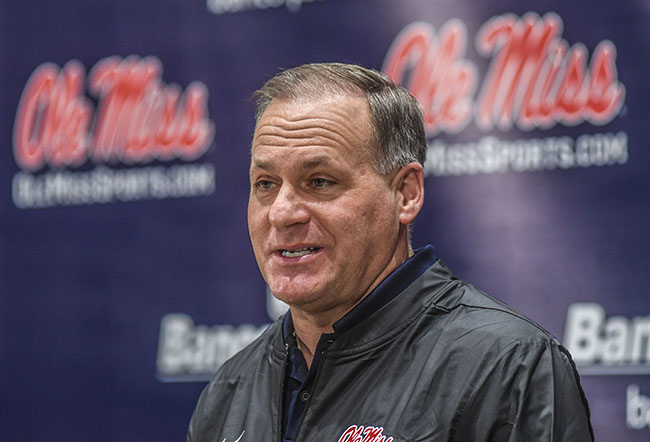 New Mississippi offensive coordinator Rich Rodriguez speaks at a press conference at the Manning Center, in Oxford, Miss. on Wednesday, January 9, 2019. Rodriguez most recently was the head coach at Arizona. (Bruce Newman, Oxford Eagle via AP)

OXFORD – After a month of departures, turnover and coaching searches, a pair of new Ole Miss football coordinators were introduced on Wednesday at a press conference from the Manning Center. Former Colorado head coach Mike MacIntyre was brought in to lead the defense, while former Arizona head coach Rich Rodriguez will be spearheading the offense. It’s time to restore stability and get to work in Oxford.

“I’m really excited for my family and I to be a part of the Ole Miss family,” Rodriguez said. “Just in the few days I’ve been here I feel great about the community, the staff, the athletic department. It is a great opportunity for me. I am happy to be back on the grass working again and coaching again.”

It speaks to head coach Matt Luke’s humility, bringing in two former head coaches to direct each side of the ball. Luke is actually the least experienced of the head coaches now. However, both newcomers seemed to know and accept their role on the team. While it’ll likely be helpful to have extra experience, both will now be adjusting back to life as positional coaches.

“I’ve always been involved in the defensive side of the ball quite a bit and always been working with the secondary in practice too. I’ve always done drills with practice and secondary meetings and that type of thing. So I’ve kept my hand in there hard understanding that,” MacIntyre said. “I feel like I’m pretty much on the cutting edge of that and understanding. I have been heavily involved with the defensive side of the ball.”

Mike MacIntyre brings with him a 3-4 defense, something he’s employed at just about every stop. Essentially, the base defensive includes three down defensive lineman flanked by four linebackers. It relies heavily on two outside linebackers on the edge to be able to both rush the passer and cover pass-catchers in space.

“I think what we’ve developed is taking the pro system – it’s the exact same system the Chicago Bears run – and taken that system and developed it for college,” MacIntyre said. “Your outside backers are really your outside rushers. We develop it to fit a 3-4 scheme to fit college football, which is more of a spread game.”

MacIntyre’s defense will be quite a different look than the 4-2-5 defense most of the players at Ole Miss were recruited here for. However, he believes there’s enough athletes on the roster to be able to perform the new roles. He’ll need the players to buy in quick in the spring. As he says, there is no extended timetable to turn the defense around. They need to be considerably better come August.

“The first game, that’s what you got to do. There’s not much time in college football. Hopefully we’ll make strides each week and hopefully we’ll play well coming out of the gate,” MacIntyre said. “I think Memphis is the tenth scoring offense in America so we better know what we’re doing and be ready out of the gate to play better and to play well.”

Many of Rich Rodriguez’s best offenses in the past featured a quarterback who was just as much of a threat to run as he was to pass. This is something he utilized recently with Arizona and quarterback Khalil Tate but as long ago as the mid-2000s at West Virginia with Pat White. However, Rodriguez said that the players don’t adjust to the offense; the offense adjusts to the players.

“Scheme wise, I don’t want to fit it into one category. We have to be able to adapt to the skills of our players. It isn’t just the quarterback even though that is a part of it,” Rodriguez said. “I’ve had running quarterbacks and I’ve had guys that were stronger throwing the ball. What we will do is evaluate it in camp and see what our guys do well and what we have got to do to win games.”

To keep himself fresh during his year away from coaching, Rodriguez traveled across the country, spending time at schools and NFL teams across the nation and learning from some of the game’s top offensive minds. He wouldn’t give away the college programs he spent time with because “now we have to play them,” but he did shed light on some of his takeaways from spending time with a few pro teams.

“I went to the Falcons because I was in Georgia a little bit,” Rodriguez said. “I went to Chicago. Mark Helfrich is a buddy of mine, the offensive coordinator for the Bears. They’re doing a lot of college schemes… it was literally just being a fly on the wall for practice or meetings. Just watching how the whole thing came together.”

MacIntyre and Rodriguez’s played each other a few times when both were coaching in the Pac12. The most recent matchup, in 2017, was Arizona quarterback Khalil Tate’s coming out party. Tate threw for 154 yards and rushed for 327 more yards, scoring 5 touchdowns on MacIntyre’s Colorado defense.

“I said (to Rodriguez), ‘don’t show that film to anybody in there. I’m going to deny it.,’” MacIntyre joked.