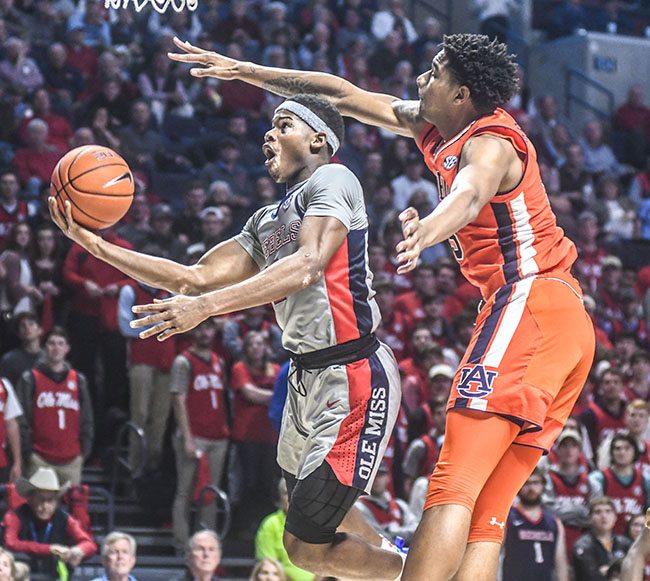 Coming off one of the greatest weeks in recent memory for Ole Miss hoops, the team is starting to get some national media attention. Announced Monday, the Rebels are ranked no. 18 in the latest edition of the AP Poll. A week containing two wins against No. 11 Auburn at home and on the road against No. 14 Mississippi State, it’s time to start taking Ole Miss basketball seriously. The rest of the Southeastern Conference is beginning to notice.

Auburn coach Bruce Pearl has probably the most experience with Ole Miss head coach Kermit Davis as anyone in the SEC. Pearl coached against Kermit’s Middle Tennessee teams five times while in his six-year run as the Tennessee head coach and now four times since he’s been at Auburn. He has a unique ability to have seen Davis grown into his new role.

“This (Ole Miss) program has won 20 games every year each of the however many years except last year and they had a disappointing year,” Pearl said after last Tuesday’s loss in Oxford. “He did a great job of signing Buffen and Hinson, those two guys. What Kermit was able to do, is he was able to give them a little more discipline offensively; they’re valuing possessions more.”

Both Pearl and Mississippi State head coach Ben Howland mentioned, when talking about Ole Miss, the fact that this roster had some talented players remaining from the Andy Kennedy era. The Rebels’ two leading scorers, senior Terence Davis and junior Breein Tyree, are players that Kennedy brought to Oxford.

“I think Kermit’s done a fantastic job, obviously. Andy (Kennedy) left him some good players, it’s not like the cupboard was bare,” Howland said after Saturday’s loss to Ole Miss. “They have a really good culture. (Kermit’s) taken it to a different level. He really has those two kids playing together and playing well together.”

That culture is aided in part by the fact that Ole Miss has some of the best guard play in the country and one of the nation’s most efficient offenses. While the Rebels now sport the AP No. 18 ranking, the advanced numbers back it up. Kenpom ranks Ole Miss as the nation’s No. 24 offense and the Rebels are second in the SEC in both field goal and three-point percentage.

“It’s a typical coach Davis team… They’re tough. They run great offense and they cut extremely hard. They don’t turn the ball over and they don’t beat themselves,” said LSU head coach Will Wade. “He’s always going to have his guys in a position to win and put his guys in positions to be successful. That’s what he’s done there.”

Ranked for the first time since January 2013, Ole Miss will take on Wade’s LSU squad Tuesday at 8 p.m. from The Pavilion. Ole Miss has played most of the season with house money. Now, as buzz and national notoriety flow in, it will be interesting to see how the Rebels handle the praise. The quick turnaround may be a bit of a surprise for people around Oxford, but for other SEC coaches, it’s almost exactly what they expected.

“Kermit Davis is one of the best coaches in our country,” Pearl said. “I’m not surprised Kermit’s turned it around this quickly.”