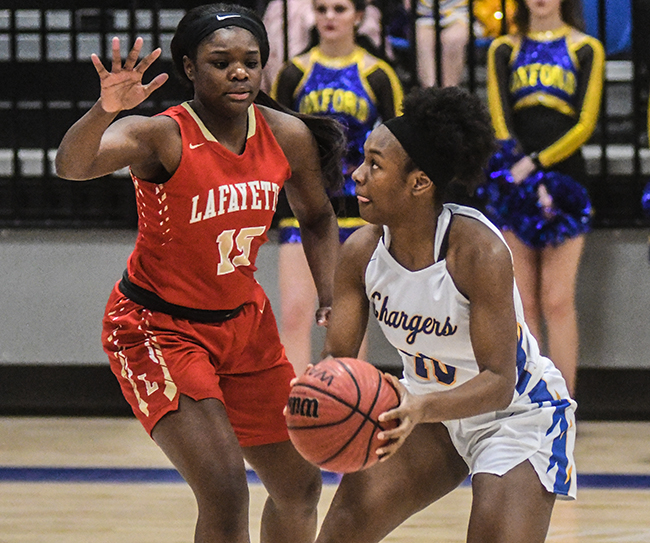 OXFORD – The second of two meetings between cross-town rivals Lafayette and Oxford ended much like the first. The Lady Commodores defeated the Lady Chargers 60-43 to start the evening, followed by the Oxford boys defeating the Lafayette boys 71-46. The non-region wins take the Lafayette girls team to 18-2 and the Oxford boys to 15-4.

Oxford held in early with Lafayette, leading the Commodores at the end of the first quarter 11-10. Afterwards, the Chargers simply were unable to score points at the rate of the Commodores. Lafayette put up 20 in the second quarter, taking a 30-21 lead into the half.

The third quarter was more like the first, with Oxford holding Lafayette to tougher shots. They cut the lead to five points at one point in the second half, but they could never score enough themselves to get back into the game. The Commodores would win by a final score of 60-43.

“To be honest with you, I thought they played really well. People can look at the score at half and say ‘wow you were only up by ten or so points?’” said Lafayette head coach Shayne Linzy. “It’s a credit to Oxford. Defensively we were really solid, but they had some moments when they were able to get the ball inside on us. Credit to Oxford on that.”

Kimaya Dixon was playing lights out for the Commodores. By halftime, the junior wasn’t just leading Lafayette in scoring with 18, she had nearly outscored the entire Oxford team’s 21 points. She slowed down a little bit in the second half, but her 32 total points is a new career high.

“Kimaya showed the outside shot and she showed she’s tough enough to play inside. She had a double-double tonight with 32 points and 11 rebounds,” Linzy said. “She didn’t show any signs of getting tired so I just let her go. We’ve been waiting for her to have a breakout game and it’s big for her coming against the rival.”

For an Oxford girls team that has struggled to simply put the ball in the basket the past few games, tonight was a bit of an encouragement. The Lady Chargers scored just 17 Friday against Columbus and 33 Saturday against Jackson Prep. Tuesday night they put up 43 on a Lafayette team that is 17-2 and ranked No. 11 in the state.

“I liked our effort. Our intensity and effort to start the game was definitely there,” said Oxford head coach Cliff Ormon. “Those two games were out of characteristic for us effort wise. That’s not us… we struggle scoring anyways, so we always have to play hard. And we did that tonight.”

Oxford boys dominant in win No. 15

Similarly to the girls game, the Tuesday night showing closely mirrored the outcome from December. The Oxford boys beat Lafayette 71-46 to advance to 15-4 on the season, completing the sweep of the cross-town rival.

Lafayette came out of the gate strong, holding an early 7-6 lead before the Chargers took over. After the quick Commodore start, Oxford gained control with a 30-7 run to close the half. Lafayette was much more competitive offensively in the second half, but were never able to chip into the Oxford lead.

“The points may not have been there but we really made an attempt to execute offensively,” said Lafayette head coach Brad Gray. “We had every opportunity in that third quarter when the score got away from us to get really selfish and get their own shots. But they didn’t. They kept working together. They kept working together and playing as a team. I told them that was the biggest positive to take away.”

The Chargers simply looked more athletic and active in this matchup. They were the first team to most loose balls and dominated the Commodores in transition. A handful of times in the game, Oxford was able to connect on alley-oop passes to Tykel Owens and Kaylan Blackmon for baskets. Where Lafayette was settling for jump shots, Oxford was constantly able to get high-percentage shots closer to the basket.

“We played pretty well overall, but we played much better in transition. We did a good job running the lanes and pushing the ball, and we did it through a number of lineups. I was pleased with the tempo of the game,” said Oxford head coach Drew Tyler. “We have a rule that it’s across half-court in three seconds and give us the opportunity to score in transition.”

Tykel Owens led the way for Oxford offensively with 17 points. Owens did about everything for the Chargers in this one, from finishing alley-oops at the rim to spot-up three pointers and off-the-dribble jumpers. For the junior guard, it was one of his best performances on the year.

“Owens is here early and stays late. He’s got a great work ethic,” Tyler said. “He rewarded himself tonight by making free throws. Now that he’s making his free throws he’s a really good high school basketball player. He can be a double-edge sword when he’s making shots from the perimeter.”

For all the importance of a rivalry game, these wins and losses are relatively meaningless in the standings. Since Oxford is a Class 6A school and Lafayette is 5A, these games count no difference than any other non-region games. Both schools will play again Friday night, with Lafayette hosting Saltillo and Oxford traveling to South Panola.