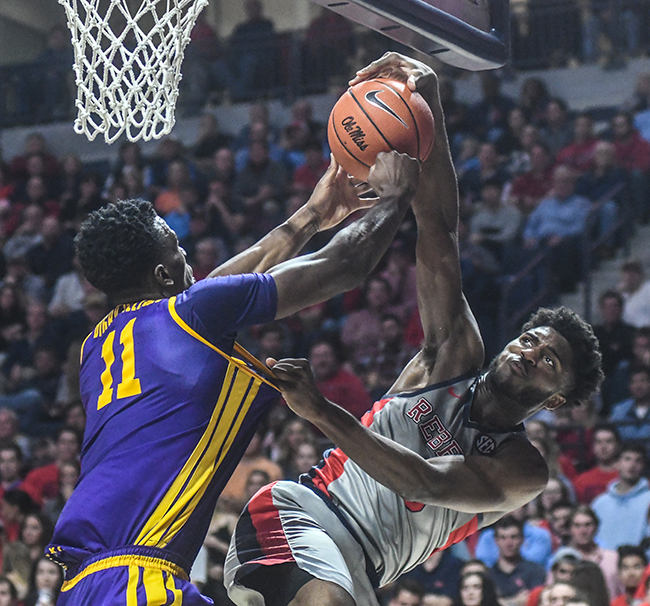 OXFORD – All good things must eventually come to an end. For Rebel basketball, it was the longest win streak in over a decade coming to an end Tuesday night to the hands of LSU. Now 3-1 in SEC play, Ole Miss needs to get up for Saturday’s home meeting against Arkansas. However, they can’t simply forget what happened Tuesday night.

“It’s amazing when you go on winning streaks that long,” said head coach Kermit Davis. “It’s been a long time since you woke up the next morning and have that (losing) feel. Just life in the SEC.”

Davis said the game came down to a two-minute period in the second half when things sort of got away from them. Ole Miss was down 38-39, before three turnovers and two either-or plays went the way of the Tigers. Next thing you know it’s 48-39.

“We could just never really get back over the hump in that game,” Davis said. “In the first half I thought we guarded tremendously. In the second half we give up 52-percent and 57-percent (from three) and kind of lost our identity.”

Kermit Davis said he thinks LSU might have the best eight-man rotation in the SEC, but who really stood out as a game-wrecker was Kavell Bigby-Williams for the Tigers. The 6-foot-11 transfer from Oregon scored 14 points on Tuesday, but had 10 rebounds and blocked five shots, absolutely dominating the Rebels in the paint.

What to expect Saturday vs. Arkansas

Despite the outcome, the loss to LSU on Tuesday night was one of the best atmospheres in the history of Rebel basketball at The Pavilion. The LSU game was just the 5th sellout in the building’s brief history; Saturday is No. 6. Expect a rocking crowd for a very winnable game against a 10-6 Arkansas team that has won just one game thus far in the Southeastern Conference.

The Razorback team relies heavily on sophomore forward Daniel Gafford. Gafford ranks fourth in the SEC in points per game, at 17.0, and second in rebounds per game, at 9.3. The task of defending Gafford will likely be a team event split between Bruce Stevens, Blake Hinson and Dominik Olejniczak. Being able to effectively limit Gafford while staying out of foul trouble will be critical for the Rebels.

Terence Davis has absolutely dominated Arkansas in his previous three games against the Razorbacks, scoring no less than 24 points against them in his career. Depending on how limited Devontae Shuler is, nursing a stress fracture in his foot, Davis may need to take that scoring role on again Saturday. Kermit Davis said that they expect Shuler to play, although he didn’t practice Thursday and will be limited on Friday.

The Arkansas game will be the last home SEC game for the Rebels until No. 24 Mississippi State comes to town on Feb. 2. Thrown in the middle will be road trips to Alabama and Florida, as well as a game against Iowa State next weekend at the Pavilion. This Saturday’s Arkansas game is at noon, televised on SEC Network.