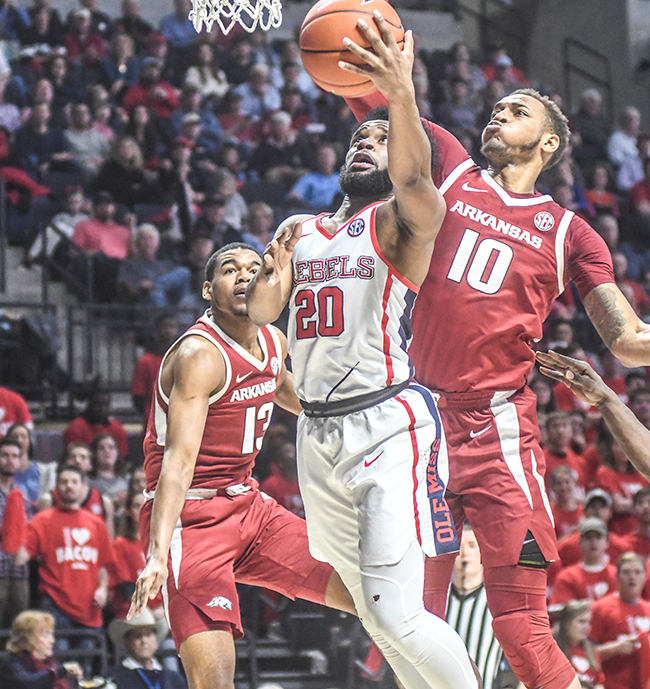 OXFORD – Coming off their first loss in conference play on Tuesday, Ole Miss rebounded Saturday afternoon. Controlling Arkansas from opening tip, the Rebels beat the Razorbacks 84-67 to advance to 4-1 in conference play.

“We’ve had two top-15 wins. We’ve had some great wins. But that was probably our best win of the year,” said Ole Miss head coach Kermit Davis. “After you lose your first league game, I thought our team had two really good physical practices Thursday and Friday.”

Ole Miss jumped out to an early lead on the Razorbacks behind a hot start by Dominik Olejniczak but were never truly able to put the team away until late. A number of just straight defensive lapses kept Arkansas hanging around in the first half. Isaiah Joe was left wide open at least twice for threes, and Razorback players were cutting to the basket with no Rebel defender to be found. The second half started by allowing Arkansas to cut an 11-point lead to six. It would never get closer.

“I thought our energy level (to start the half) was poor,” Davis said. “I could just sense it. we had a letdown. We lost our energy and Arkansas would play so much harder in that stretch than we did… we have to do better coming out of halftime.”

The Ole Miss big men were was a noticeable part of the game plan for the start for Ole Miss. Going right at one of the best big men in the SEC in Arkansas’ Daniel Gafford, Olejniczak had his best half of the season, scoring 13 points. However, he wouldn’t score a single second half point, but was picked up by Bruce Stevens, who finished with 14 points and 7 rebounds.

“I thought tonight, Dom and Bruce together, that was the best they have played,” Davis said.

Terence Davis notched one of his best all-around games of the season. He scored 18 points, had 9 rebounds and 8 assists.

Nursing a stress fracture in his foot, sophomore guard Devontae Shuler did not start for the Rebels in this one. Replaced in the starting lineup by D.C. Davis, Shuler played 25 minutes, down about ten from his typical usage. He would score just 3 points.

The Rebels did a great job controlling Arkansas’ best player, sophomore forward Daniel Gafford. Coming into the game, Gafford was second in the conference in rebounds and fourth in points, averaging 17 a game. He was able to swallow rebounds against Ole Miss, grabbing 10, but the Rebels kept him in check offensively. He scored just 9 points.

“I thought we did a great job (on Gafford). Great job. We missed a few double teams, but that’s going to happen,” Davis said. “You hold him to only six attempts and no offensive rebounds, that’s about as good as you could do. I thought that was the key to the game.”

Ole Miss returns to action on Tuesday. They travel Tuesday to Tuscaloosa to take on 11-5 Alabama, before returning home next Saturday to play Iowa State.