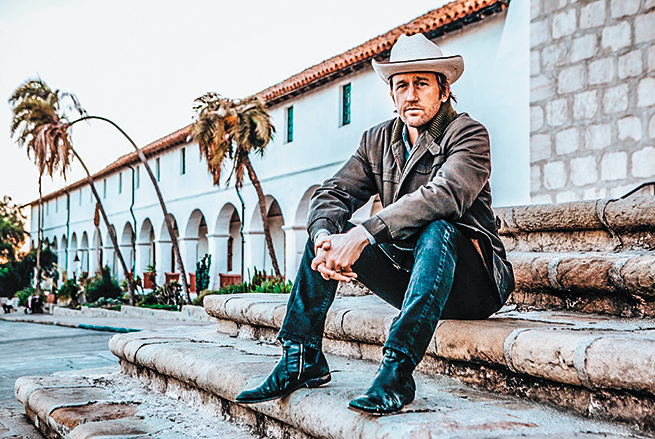 Chris Shiflett performs at The Lyric on Thursday night.

When people hear the name Chris Shiflett they immediately think of arena-rocking guitar riffs in front of thousands. There is another side to the Foo Fighters lead guitarist and he intends to show it during his performance at the Lyric Oxford on Thursday.

Shiflett is the opening act on this current stretch of dates with Blackberry Smoke, which begins in Oxford. He will be playing songs off his most recent solo record ‘West Coast Town’, which came out in the spring of 2017, as well as possibly some new songs off his forthcoming record that is slated for a summer release.

The 47-year-old guitarist’ solo endeavor has a left coast country flavor which Shiflett has described before as a ‘louder, twangier, more aggressive version of country’ and even has a hint of Buck Owens to it. It is the furthest thing from a Foo Fighter album and that is how Shiflett wants it to be, an extension of himself.

“These are just my songs,” Shiflett said. “The songs just come out the way they come out. …It’s always different and I always write down ideas when they pop in my head, or try to. Same with musical ideas. I just record them on my phone when it hits me. I write with some other folks I’m friends with and it’s always fun when you get somebody else’s take. When you sort of get an idea as far as you get it and then you give it to somebody else and they do something with it, I love that.”

The title track off ‘West Coast Town’, which was produced by Dave Cobb who has worked with Chris Stapleton and Jason Isbell, is the best example of Shiflett’s style and approach to his take of country music. When he began writing the song it started out one way then Cobb went to work on it and turned it into what eventually made it onto the record.

When he is not working on his own music in a Nashville recording studio or in the midst of the busy schedule the Foo Fighters require, Shiflett finds time to talk to singers and songwriters from all genres on his ‘Walking the Floor’ podcast. The podcast, which has 132 episodes and the latest being an interview with boxer Manny Pacquiao, has helped Shiflett understand the mechanics of songwriting.

“I always ask people about their songwriting and how they go about doing what they do and it seems like nobody ever really has a straight answer about that,” Shiflett said. “That seems to be the universal truth. It’s almost like even a mystery almost to the people that do it. Where exactly it comes from or why and every time it’s a little bit different.”

For the upcoming album, which is tentatively scheduled to drop June 14, Shiflett brought back Cobb and others who helped him with ‘West Coast Town’. The recording took place between legs of the Foo Fighters’ tour last year when he could squeeze a couple weeks into his schedule throughout. The country vibe will still be there but Shiflett took a harder approach musically this time around.

“I would say the new (album) is definitely a little more rocking,” Shiflett said. “I think it’s a more guitar-driven record than the last one, which is weird to say because I’m a guitar player and there was plenty of guitar on the last record. This one’s just got more crunchy, rock and roll-type guitar-playing on it.”

After driving cross-country from Los Angeles to Oxford, Shiflett is embarking on a large spring tour that will have plenty of stops in the southeast. Along with Thursday’s first show in Oxford, he will also play in New Orleans and Memphis next month along with dates in Georgia and North Carolina.

Tickets to see Shiflett and Blackberry Smoke are still on sale at the Lyric box office and theoxfordlyric.com. Doors open at 7 p.m. and the show will begin at 8 p.m.