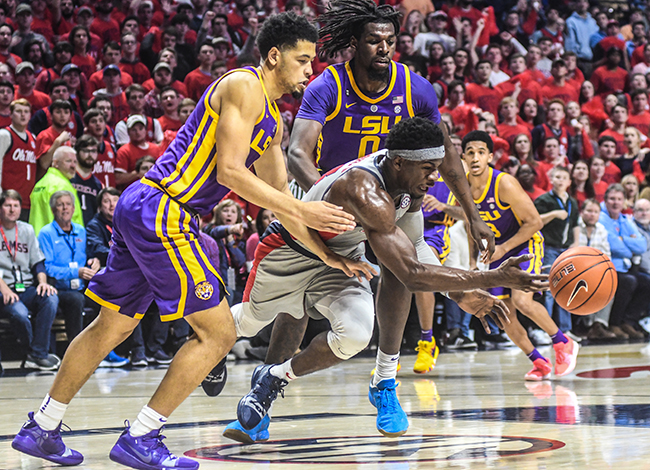 Ole Miss played their worst first half of the season Tuesday night in Tuscaloosa. Heading to the locker room down 16 points after just 20 minutes of play, things never really looked up from there. The loss came exactly one week after falling to LSU by 14 points at home. At 4-2 in the conference, the Alabama and LSU games are the only SEC losses on the season for Kermit Davis and Company. Interestingly, there are some striking similarities between the two games.

Davis highlighted Monday in his weekly media availability the importance of ball control in road games, such as the one they were preparing for Tuesday at Alabama. However, the team seemed to do just the opposite of taking care of the ball. Against Alabama, Ole Miss turned the ball over 16 times (nine in the first half) leading to 23 Alabama points. It’s a common thread in losses. They also turned the ball over 16 times against LSU and 15 earlier in the year in a November loss at Butler.

For an Ole Miss team that is second in shooting percentage in the conference at 48.8-percent, they’ve struggled mightily in the two losses. While it’s easy to say that it’s easy to win games when you make shots, it’s the means of getting to the shots that have failed. The ball has stopped moving in the losses. This leads to more isolation ball and abysmal three-point numbers. Against Alabama, Ole Miss shot 6 for 20 (30-percent) from three. In the LSU loss, that number was 8 for 28 (28.6-percent).

Individually, sophomore guard Devontae Shuler and junior Breein Tyree have struggled in the SEC losses. While it’s probably not fair to judge Shuler, as he’s dealing with a stress reaction in his foot, he scored just two points on Tuesday and just six against LSU. Tyree has been a bigger culprit. Tyree is the third leading scorer in the conference, averaging 17 points per game. However, scored only nine against Alabama and 12 against LSU.

There are some other outlying numbers in the two SEC losses. The Rebels were 7 for 14 (50-percent) from the free throw line in Tuscaloosa and 9 of 17 (52.9-percent) against LSU. They also had an abnormally high number of shots get blocked, with nine at Alabama and seven vs LSU. Foul trouble has also been an issue. Terence Davis fouled out with over 16 minutes to play against Alabama. Against LSU, K.J. Buffen fouled out and both Davis and Bruce Stevens had four fouls.

Ole Miss has now lost two of three games since they first got ranked last week. The Rebels need to get things fixed, and quick – the road won’t be getting any easier anytime soon. Ole Miss takes on No. 24 Iowa State on Saturday before a road trip next week to Florida.