Ole Miss drops out of the AP Top 25 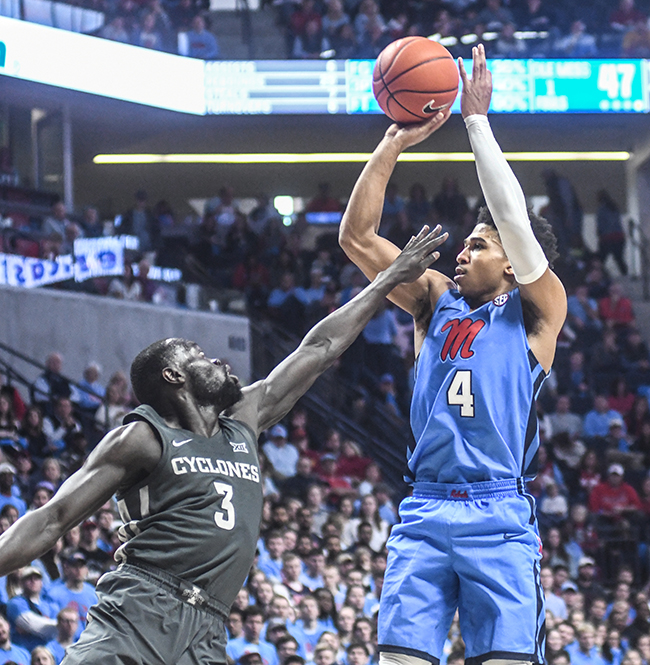 Ole Miss has dropped out of the AP Top 25 poll following losses at Alabama and at home against Iowa State last week.The Rebels were previously ranked No. 20 and received 7 votes in the latest voting. Ole Miss plays at Florida on Wednesday.

Tennessee handled its first week at No. 1 in more than a decade well enough to stay on its AP Top 25 perch.

The Volunteers earned 48 of 64 first-place votes in Monday’s poll to extend the program’s first stint at No. 1 since February 2008. Tennessee (18-1, 6-0 Southeastern Conference) has won 14 straight games — the program’s longest winning streak since the 1922-23 season and one shy of the school record — since suffering a neutral-court loss to Kansas in November.

“To be quite honest with you, I talked to them about [how] it’s new to them,” Volunteers coach Rick Barnes said of the No. 1 ranking after Saturday’s victory against West Virginia. “They’ve earned it, but they can’t forget what got them where they are.

“Is there more noise around them? Obviously, it is. But they’ve got to be mature enough to deal with that.”

The top six teams in the poll remained unchanged, with Duke sitting at No. 2, followed by Virginia, Gonzaga, Michigan and Michigan State. The Spartans stayed put despite suffering their first Big Ten loss, at Purdue, in a game that helped lift the Boilermakers back into the poll.

The Wildcats (16-3, 5-1 SEC) moved past Nevada to reach No. 7 after Saturday’s home win against Kansas extended their streak to six games. Kentucky was ranked No. 2 in the preseason poll before a blowout loss to Duke in the season opener dropped the Wildcats to No. 10, then they slid even further, to No. 19, by mid-December.

But Kentucky has been rising ever since, and its only two losses since the Duke game have come by a combined three points.

Nevada slid a spot to No. 8, while North Carolina and Marquette each rose two spots to round out the top 10.

No. 15 Louisville (15-5) has been playing well for the past two weeks under first-year coach Chris Mack. Now the Cardinals, who cracked the poll for the first time last week, have moved up eight spots for the week’s biggest jump after reaching 6-1 in the Atlantic Coast Conference during a week that included a win against now-No. 23 North Carolina State.

Maryland (16-5) took a big fall after losses at Michigan State and then to Illinois in New York. The Terrapins fell eight spots to No. 21 for the week’s biggest slide among ranked teams.

No. 18 Buffalo fell four spots for the other significant slide.

No. 17 Purdue, No. 24 Wisconsin and No. 25 Florida State returned to the poll after being ranked for multiple weeks earlier this season.

Purdue was ranked in the first four polls and peaked at No. 19. Wisconsin was ranked in seven polls in November and December, reaching No. 12.

As for Florida State, the Seminoles had been ranked in every poll this season, peaking at No. 9 in December and standing at No. 11 two weeks ago, before falling out last week following a third straight ACC loss.

The ACC led the nation with seven teams in the poll, three of them in the top 10. The Big Ten was second with five ranked teams, followed by the SEC’s four and the Big 12’s three.

Steps being made to limit the spread of Chronic…