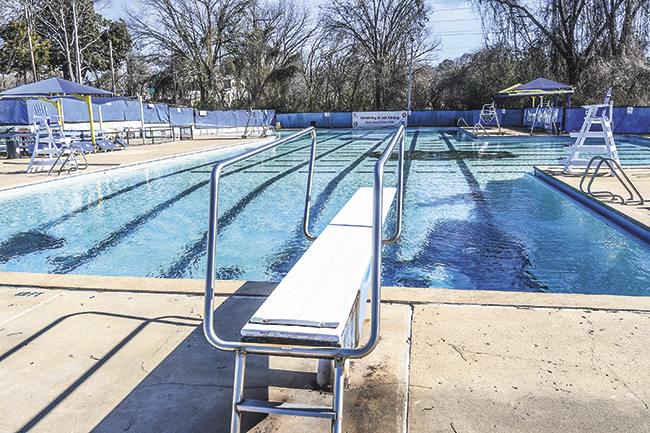 On Monday the Oxford Mayor and Board of Aldermen discussed repairs to the Oxford Swimming Pool, in Oxford, Miss. on Tuesday, January 29, 2019. (Bruce Newman, Oxford Eagle)

It is still cold outside but before the warmer months of summer arrive the Oxford city pool is set to have a makeover. The Oxford Board of Alderman listened to a request to repair the pool nearly four years after the last major repairs were made.

The pool had work done in March of 2015 that cost nearly $250,000. The repairs included updated safety features, new plaster and tile. In the three swimming seasons since those repairs the tile began to crack in certain areas along the coping line. Along with the cosmetic damage there is now a visible crack around the perimeter of the swimming pools that is leaking water under the pool deck. Due to those issues the concrete deck is buckling, cracking and heaving.

During Monday’s recess meeting the board held discussion about two potential options of repairing the pool just months before this year’s swimming season begins. The proposal was given to the board in requesting their direction on how to proceed with the repairs for both the short and long term due to ongoing maintenance cost, age of the pool and high demand for swimming.

“We asked the City Board of Aldermen for direction for the future of the city pool,” Gaines said. “There are some extensive repairs that need to be completed if the pool in its current location is a long term deal. The ultimate decision that was made today, was to get the pool operational for the upcoming season, and to provide the BOA and the Park Commission Board time to formulate a long term direction for the city pool.”

The first option, which was called ‘Option Number 1’ in the proposal to the board, would be to spot-patch the existing cracks and concrete deck in the areas that are most noticeable or could endanger swimmers as they walk along the deck. In order to fix the pool with that option there were two alternate approaches. The first was to remove all tile on the perimeter and fill in the cracks and retile with a total cost of $50,000. ‘Alternate B’ would be to cut out the lower gutter in order to drop a water line below the crack and cost $27,000.

The second option, or ‘Option Number 2’, would be a more extensive approach. It calls for the removal of the entire beam and install a stainless steel system, which would be Phase 1 of a two-step process. The second phase would be the removal of the deck and re-plumb the pool. This option would total in cost of $390,000.

The city pool opens Memorial Day and closes the day after Labor Day.