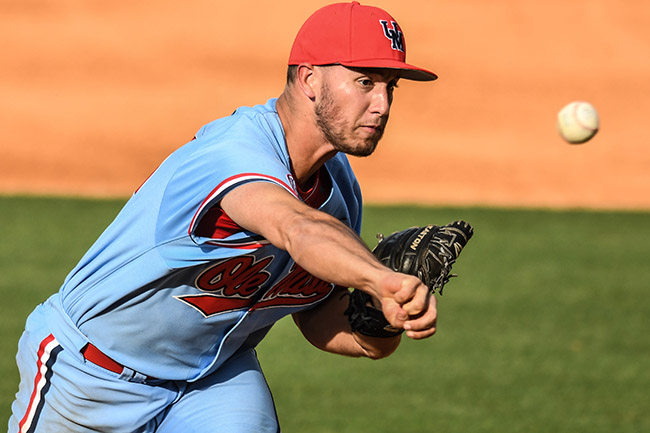 OXFORD – After posting a 23-5 record and an absurd ERA of 1.65 throughout his high school career as a starting pitcher in Georgia, Will Ethridge was moved to the bullpen upon his arrival at Ole Miss. After coming primarily out of the pen for his first two years on campus, it’s finally Ethridge’s turn to shine on the weekend. Now a junior, he will be the Rebels’ Friday night starter for the 2019 season.

“You sign guys to be weekend guys. But sometimes when they get here, they’re not ready to be that. But Will got off and had a great freshman year. He had a start or two on the weekends for us as a freshman, but kind of found his niche in the bullpen,” said Ole Miss head coach Mike Bianco. “Last year, I think we had a really good staff… he kind of got pushed out and back to the bullpen. I don’t think there’s ever been a time where we didn’t think Will would be a weekend guy here.”

In two years of primarily middle-relief work, Ethridge hasn’t even pitched 100 innings in a Rebel uniform. Now, he’ll be asked to throw at least six innings every Friday and lead a new-look rotation that lost every member of its weekend staff from a year ago.

“Being the starter now, I’m the one who’s setting the tone for the game. I’m going out there, and I have to bring the energy back for the bottom of the first inning for us to go out and put up some runs there,” Ethridge said.

Bianco and his staff have been gearing the pitchers up since the start of the New Year. They hope that starters’ arms will be live enough to throw five to seven innings a game from the start of the season. Ethridge says they have been working out from the bullpen starting all the way back on Jan. 2, when “it’s probably 20 degrees outside and we’re still throwing.”

Ethridge has thrown 91.2 innings of primarily relief work as a Rebel. He posted a 2.42 ERA in 19 appearances as a freshman. Last year, in 26 appearances, he had a 3.91 ERA. In one long-relief outing as a sophomore, he struck out ten Auburn batters over 6.2 innings of relief, allowing just a single unearned run in a 10-3 victory.

Ethridge says he’s been working on developing his secondary pitches. Now in a starting role, he wants to throw more changeups, especially against left-handed hitters. Additionally, he’s been working more and more to develop his curveball. One point of assurance for the young weekend staff is the guys behind them. The Rebels return seven of their regular starters on offense.

“It gives us a lot of confidence knowing we have the best returning lineup in the SEC. Going out there, you could possibly give up one or two runs and our offense will get it back,” Ethridge said. “We’re just going to go out there, have a lot of energy and do the best that we can do.”

For an Ole Miss team now less than two weeks from opening day on Feb. 15, there are certainly a handful of spots still to iron out, and a handful of questions Bianco and his staff need to answer before the start of SEC play in March. However, now it seems like the Friday night starting role is all Will Ethridge.

“The biggest thing, I think, for the next three weeks is just figuring out the rotation. It looks like Will (Ethridge) will be the Friday night guy,” Bianco said. “But who’s going to follow him Saturday and Sunday? What will the roles look like in the bullpen? Those are things we’re trying to answer over the next few weeks.”