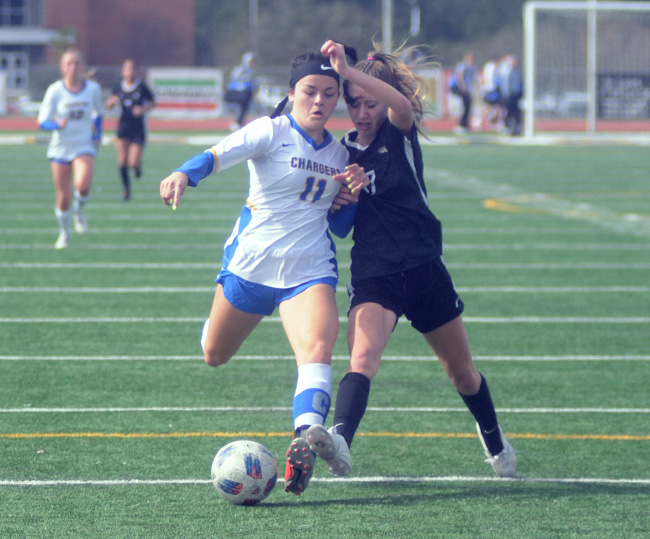 FLOWOOD — For the second time in the playoffs Oxford fell behind in the opening minutes of the match. They were able to come back but Northwest Rankin got the better of the Lady Chargers in their rematch with a 4-2 win at Northwest Rankin High School on Saturday.

Northwest Rankin (15-5-4) advances to Tuesday’s Class 6A North Half championship against either Tupelo or Madison Central. Oxford’s second season in 6A comes to an end with a record of 18-2-1.

When the two teams met on Dec. 20 Oxford defeated the Lady Cougars 2-1. On Saturday when it counted it was Northwest Rankin who managed to keep their season alive for another game.

Northwest Rankin wasted little time in taking the lead with a goal by junior forward Molly Ford in the first 15 seconds of the match.

“We lost a mark on the backside and (Northwest Rankin) came out with a lot of energy,” Oxford head coach Hunter Crane said. “We talked about it before the game and they put one away and that gave them a lot of life and we played with a little panic from that point forward.”

In what eventually became her final game in an Oxford uniform Morgan O’Connor scored one goal, coming in the 7th minute of the match to things back up 1-1. It appeared Oxford might have a couple opportunities at penalty kicks in the first half but no whistle was blown and the referees allowed things to play on and get slightly physical as the match wore on.

Oxford’s Kathleen Myers scored the Lady Chargers’ only other goal in the 78th minute.

“When we went down early it messed with their heads a little bit,” Crane said. “We fought all year long from behind at times so we felt confident, but it did effect them mentally when we let that one in early.”

Midway through the opening half Northwest Rankin regained their one-goal advantage with a score from senior KK Williams in the 19th minute. The Lady Cougars would take a 2-1 lead into halftime.

Just like how the match started, Northwest Rankin struck early with a goal by sophomore Jaelyn Hanson in the 3rd minute of the second half. Junior midfielder Falon Lawrence added a goal in the 69th minute to make it a 4-1 lead for the Lady Cougars at the time.