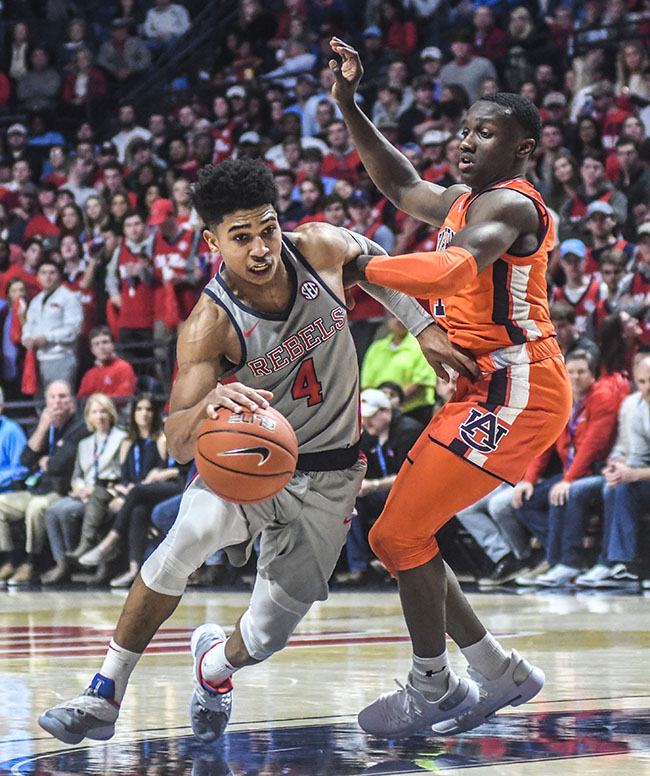 OXFORD – Following a bounce back week, picking up wins over Texas A&M and Georgia, Ole Miss is back where they want to be – in the NCAA tournament conversation. However, junior guard Breein Tyree’s message to the media Monday afternoon was simple: the team needs to keep its eyes on the present.

Tyree said they have been doing a good job of this lately, but that there’ve been times that they lost track of that message. Particularly, that message was likely forgotten during rough times for the Rebels, who lost four straight and five of six games entering last week.

With the train now back on the right track, head coach Kermit Davis isn’t shying away from talking to his team about the tournament possibilities. Tyree acknowledged they’re all aware of the bracket predictions and the ratings, but it’s not their focus. For Davis, it’s how he’s always dealt with tournament talk – there’s no reason avoiding it.

“The guys who matter on our team are very alert about it. It makes them feel good, that they’re in these kinds of games,” Davis said. “We’re not going to talk about the NCAA Tournament every day, and how many wins and that kind of stuff… I’m not trying to put any kind of pressure on them, I just want them to know the importance of it.”

Last week was a great opportunity for Ole Miss to get back to winning ways, but it’s worth noting both those wins came against SEC bottom dwellers. Things are about to pick back up in difficulty. Wednesday night, they travel to one of the tougher road environments in the league, at Auburn.

The first meeting between the two schools back in early January was what first got Ole Miss into the national conversation. Ole Miss beat then-No. 11 Auburn in The Pavilion on Jan. 9 by 15 points, their first of back-to-back wins over top-15 teams. The Tigers have since fallen out of the AP Poll, but they’re still one of the better teams, particularly on offense, in the conference.

“When you can hold Auburn to under 70 points, obviously you guarded (well),” Davis said, talking about limiting the Tigers to 69 points in the first meeting. “The points off turnovers are huge against Auburn, especially there. If you get that team, in the open floor off live-ball turnovers, it’s really difficult. We did a lot of simple things right.”

Guard play will be critical in this matchup. On the court will be four of the top seven guards in the SEC conference in scoring in Ole Miss’ Breein Tyree and Terence Davis and Auburn’s Bryce Brown and Jared Harper. Ole Miss did a good job holding Harper to nine points in the first meeting. However, Brown went off for 23 points. Like the first meeting, the game will likely be decided in the backcourt.

“Defensively, we really made their guards uncomfortable for a lot of the game,” Tyree said. “I think we kind of set the standard on the defensive end and that really helped us.”

The year has been streaky for Ole Miss, winning ten in a row before losing five of six games. Wednesday night is a chance to continue another streak, getting the Rebels to three in a row. The Auburn game will take place at 7:30 p.m. on the SEC Network.