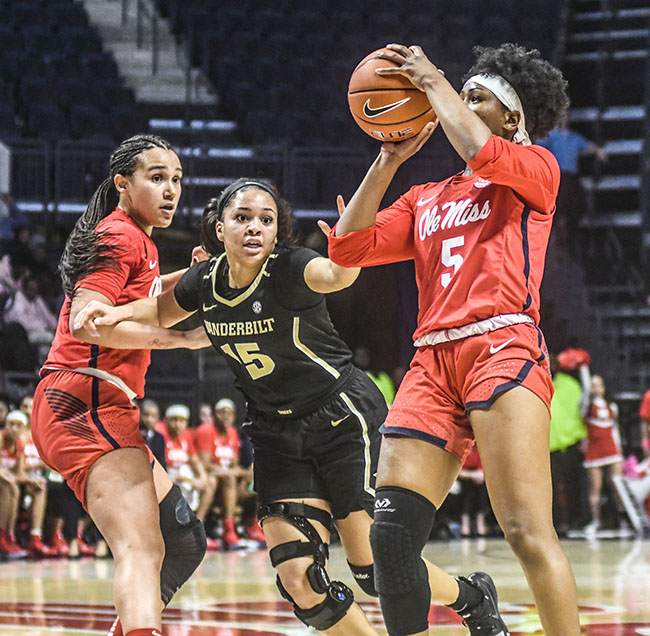 Had Ole Miss and Vanderbilt played eight quarters instead of four, they would still most likely be deadlocked in a one-score game with neither team playing well enough to secure a comfortable lead.

But, by the time the four required quarters were over, the Rebels were winning.

Crystal Allen lead all scorers with 23, and her last 3-pointer with 51.1 seconds left put Ole Miss by two and for good as the Rebels staved off Vanderbilt 65-60 at The Pavilion at Ole Miss on Thursday.

Two late Vanderbilt turnovers gave Ole Miss the ball twice within the 27-second mark, and the combination of Mimi Reid and La’Karis Salter iced the game with free throws.

The win snapped a five-game losing streak for Ole Miss, and coach Yolette McPhee-McCuin knew that would do wonders for the team’s morale.

“I knew that that was the case,” she said. “We really needed the win.”

Aside from Allen’s 14 first-half points and Shandricka Sessom’s 12 first-half points, the first half went similarly to most other Rebels’ games: solid start, met by a dismal second quarter.

However, the biggest difference was that Vanderbilt couldn’t take advantage when Ole Miss was slumping.

The Commodores were plagued by 10 first-half turnovers, which kept them from full taking advantage of Ole Miss’ second quarter woes.

Vanderbilt did begin the second half shooting over 50 percent from the floor, keeping them within striking distance of the Rebels throughout the third quarter. Allen cooled off from her first half onslaught, and wasn’t able to put any breathing room between Ole Miss and the Commodores.

Vanderbilt may have been in the same slog Ole Miss was in the final stretches of the game, but McPhee-McCuin said the Commodores were a team she would not take for granted.

“Vandy has been in every single game,” McPhee-McCuin said. “They’re not a new team.”

Cierra Walker put the Commodores ahead with a 3-pointer with about seven minutes left in the game. Vandy pushed its slight lead to three, but La’Karis Salter tied the game for the seventh time by snagging a pass that wasn’t meant for her and chucking in a 3-pointer.

Salter then made another 3-pointer later to put Ole Miss up by one at 59-58. Vanderbilt would tie it at 59 with about two minutes remaining in the game.

Salter is shooting 23 percent from 3-point range this season, but McPhee-McCuin and Allen both attest to her confidence level being among the team’s best.

Ole Miss shot 42 percent from the field in second half, and while Vanderbilt shot 44 percent in the second half, a fourth-quarter field goal percentage of 27 percent did the Commodores in.