With a goal in mind, the lady rebels take on the back end of SEC play 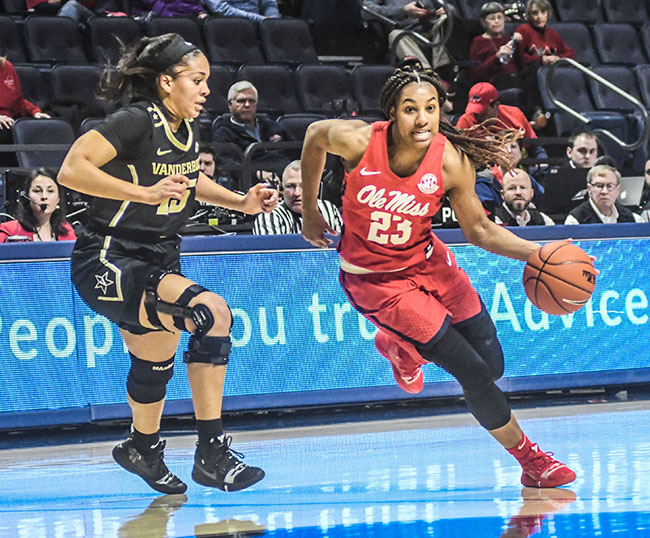 Before the South Carolina game, Ole Miss women’s basketball coach Yolette McPhee-McCuin wanted to talk about a long-term goal with her team this season.

Ole Miss would lose to by 34 to the No. 12 Gamecocks, but luckily, she was able to table that discussion for later.

“I knew South Carolina would be a tough feat,” McPhee-McCuin said. “After that was done, I knew we had a bye week.”

This is when McPhee-McCuin set a goal for a first-round bye in the SEC women’s basketball tournament. While this goal might not be on the same spectrum as other programs, it would act as a statement from the team that was picked to finish dead last in the SEC.

McPhee-McCuin said the team printed out brackets, assessed where every team currently is in the SEC and identified three ongoing races in the conference.

According to McPhee-McCuin, there’s the two-team race for the top, which features a Mississippi State that lost to Missouri Thursday night, a five-team race for third place and below and more clumps fighting for the final single digit seeds.

McPhee-McCuin knows there’s more to it, but if Ole Miss gets a few breaks they can accomplish its goal of attaining that bye.

“I should be coach of the year if we get that,” McPhee-McCuin joked. “No one would be expecting that.”

If Ole Miss could secure that bye, McPhee-McCuin said it would huge for the program as it gives the team some rest going into the conference tournament instead of playing right off the bat.

The bye would also prove a few doubters wrong. Some of which were close to the program.

“I remember we were in Florida and Van Chancellor called me, “McPhee-McCuin said. “He said ‘I didn’t think you’d win a game.’”

“The expectations were that low,” McPhee-McCuin said. “In my opinion, we’re superseding that.”

Senior guard Crystal Allen knows the team is playing for its pride and rankings at this point, however she said the team can attain that goal of a first-round bye with some laser-sharp focus.

To get a first-round bye, Ole Miss will, at the lowest, need the 10th seed. The Rebels are currently the 12th seed, and need to make up some serious ground on the two teams ahead of them: Alabama and Georgia.

Ole Miss will get a crack at Georgia next on February 18th, but only has five games to slide into that 10th seed.

At this point, getting a first-round bye comes down to getting wins and getting help. But, even if Ole Miss doesn’t get that bye, McPhee-McCuin wouldn’t be too downtrodden.

“I’ll just give myself coach of the year, regardless,” she said with a grin.