Baseball is back: thoughts from Ole Miss’ opening weekend 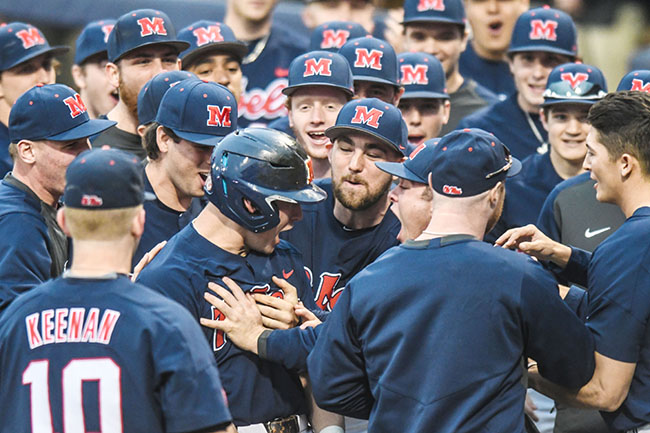 Ole Miss baseball returned Friday for what became a two-day slate of games against the Horizon League’s projected champ Wright State. The Rebels split two games with the Raiders, winning 10-1 on Friday and losing 9-5 on Saturday. Unsurprisingly, Sunday’s game would be rained out.

Will Ethridge started for the Rebels Friday night. His stat line looks solid, 5.2 innings, four hits, five strikeouts and now earned runs, but ultimately it was a bit of an up and down outing.

It took Ethridge 29 pitches to get out of the opening frame, one in which he committed his own fielding error. In the fourth inning, he would give up two baserunners with no outs before getting himself out of the jam. He pitched really well late, and it looked like he may have just needed to shake off some rust.

Offensively, the two bright spots have to be Cooper Johnson and Thomas Dillard. Johnson went 4-7 on the weekend with a homer, a walk, and three runs batted in. On Friday, he was a triple shy of hitting for the cycle. However, Johnson is a bit of a mystery.

The junior catcher also got off to a red-hot start in non-conference play last year, but struggled tremendously in SEC play. He would bat just.235 on last year with 11 runs batted in. Hitting cleanup, Thomas Dillard went 5-6 from the plate on the weekend with three walks. He also hit a home run to cut the Saturday deficit to 8-5.

Zack Phillips’ Saturday start at pitcher certainly didn’t go as planned.  Phillips is a junior college transfer. He went 10-1 as a JUCO starter with a 2.70 ERA, but got shelled early in his first Ole Miss appearance. He wouldn’t even make it through the third inning, finishing with 2.2 innings, six hits, four earned runs and two walks.

An issue with Phillips seemed to be his fastball velocity. Those who saw him play at the JUCO level said he threw 92 and 93, topping out around 94 miles-per-hour. Saturday he was throwing in throwing in the high 80s. It was cold and it was his first start, but it wasn’t good. It’s incredibly unlikely that Bianco would remove him from the Saturday role after one bad outing, but Phillips is on a short leash.

True freshman pitcher Gunnar Hoglund, the 36th overall pick in the 2018 MLB Draft, was scheduled to start Sunday. We will have to wait another week before getting a look at the power righthander.

Interior infield positions were ones fought over throughout fall and spring ball. Grae Kessinger started both games at shortstop.  Anthony Servideo started Friday at second base but was replaced Saturday by Jacob Adams. Adams hit the best of the three, going 2-4 Saturday. However, Kessinger and Servideo are both yet to get a hit on the year.

Defensively, right field is a big question mark moving forward. Ole Miss started Tim Elko in right on Friday with Chase Cockrell at designated hitter. Saturday those two swapped roles. Cockrell has a fantastic arm, but there’s certainly some issues with ball tracking. Cockrell took some questionable angles at a few well hit balls in his direction on Saturday. Bianco scheduled sophomore Carl Gindl to play right field on Sunday before the rainout.

Weather was a concern all weekend. It was misting Friday and Ethridge had to leave the game with a mild blister on his throwing hand, something he related to the moisture in the air. Saturday’s game finished in a steady pouring of rain and the Rebels simply didn’t play on Sunday.

Despite the 1-1 opening weekend, the Rebels remained steady in the rankings at No. 10, at least according to D1Baseball.

Rain may not be done making its mark. While the Rebels have already lost one game due to rain, Tuesday evening’s game against Arkansas State seems to be in serious jeopardy as well. Forecasts call for an 80-percent chance of rain.