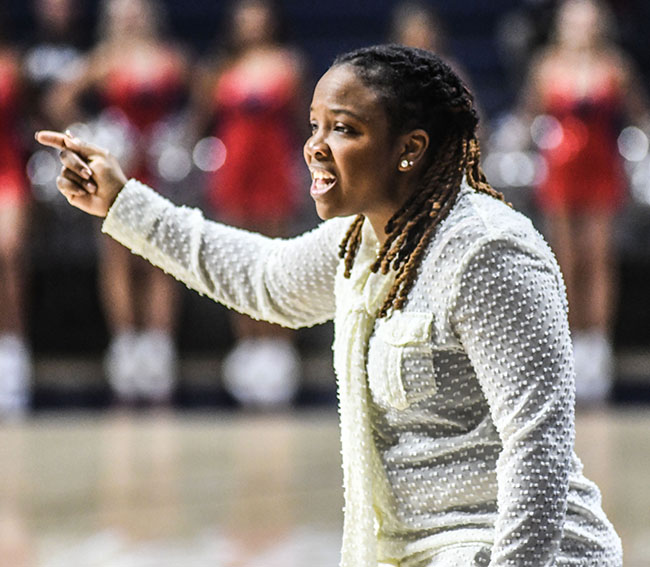 OXFORD – Coach Yolette McPhee-McCuin was candid from the moment she took the Ole Miss job. It was going to take time. Coach Yo, as she’s affectionately called, inherited a team that won a single SEC game last year, many of the players leaving after Matt Insell was fired last year.

Her team to start the 2018-19 season was not only devoid of much talent, but it had also essentially never played together. Simply examining the record – the team is 9-18 and 3-10 in the SEC – it may seem like an underwhelming or underperforming team. At three conference wins, the team is actually overachieving.

Coach Yo’s energy is often both attractive and brutally honest at the same time. Earlier in the season, on the record, she talked about how every team in the SEC was capable of being beaten on any night, “well, except (Mississippi) State.”

Thursday night, McPhee-McCuin’s Rebels lost to Mississippi State by 14 points. Afterwards, she would say there’s no moral victories, but this was a team that lost to MSU by 31 less than a month ago. They’re getting better.

“They compete and they have a lot of pride,” said Mississippi State head coach Vic Schaefer. “As they get to play longer and longer together and they get their rotations, everyone should be getting better this time of year. And they have.”

The work Coach Yo has done with this team in a short period of time has caught the eye of a handful of SEC coaches that have yielded incredibly encouraging thoughts about the young coach after games. None have been as optimistic as Texas A&M head coach Gary Blair after a Feb. 3 defeat of Ole Miss.

“I have known (Coach Yo) for a long time and wanted to hire her at one time,” said Gary Blair said. “When you coach that hard, it is going to rub off on your players. Because if not, you are not going to want to come into the dressing room and face that young lady. Ole Miss has a storied history of basketball here. It is going to take time to get it back. I had to start the same way. I was 9-18 my first year. You have to build; You have to recruit. To build your fan base, you go out into the community, you talk, you do all the little things.”

Building this Ole Miss program to the level McPhee-McCuin envisions in her head starts with recruiting. After Thursday’s loss, she remarked about where MSU would be if Teaira McCowan wouldn’t have chose to play her college ball in Starkville or where No. 13 South Carolina would be without A’ja Wilson.

“I’m anxiously waiting for our kid to come in and say ‘I want to put Ole Miss back on the map,’” McPhee-McCuin said.

Thursday’s loss to Mississippi State at the Pavilion drew an announced 4,125 fans. The number is considerably higher than any Rebel game on the year, but estimating that 3,000 of the fans were wearing maroon is probably a generous estimate for Ole Miss faithful.

“Anytime you have a top-10 team, fans travel… winning matters. Winning does that. In talking with Vic, in his first two years no one came to games. Now they have busses coming. It just takes time and it takes patience,” McPhee-McCuin said. “I can assure you that as we continue to build the program, the fanbase will continue to build. You can’t have one without the other. So you’re not going to here me go on a tangent about ‘hey we need more fans!’ No. They want a product.”

Shaefer arrived in Starkville in 2012, inheriting a 14-16 team. He won only 13 games in his first year. It took him three years before the team’s first NCAA appearance. In year five and year six the team played in the national championship game. However, from the start of his tenure, things were pretty similar to where they are now in Oxford.