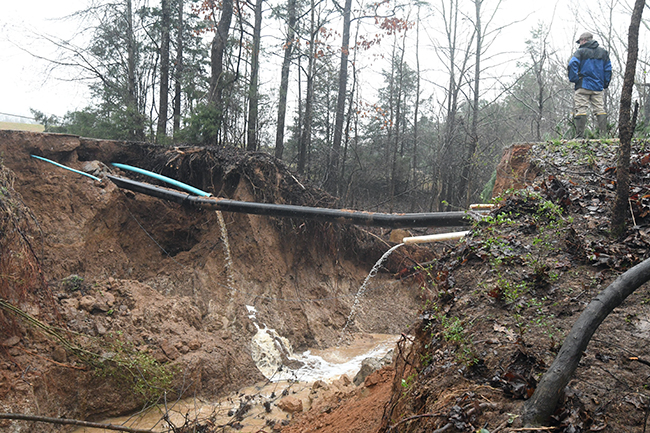 Hunter Maples looks over a water line break caused by heavy rainfall near the Max Hipp Industrial Park in Oxford, Miss. on Saturday, February 23, 2019. The city of Oxford has issued a self-imposed precautionary boil-water notice for all customers that receive water from the city of Oxford, including those customers outside the city limits. (Bruce Newman, Oxford Eagle via AP)

Oxford issued a self-imposed boil water notice on Saturday morning to all customers who receive water from the City of Oxford, including those customers outside the city limits.

The notice comes after at water main broke north of town that is affecting the southern portion of Oxford due to major flooding. The Oxford Utilities Twitter accounted on Saturday posted a photo of the pipe that burst near the Max Hipp Industrial Park.

This only affects City of Oxford water system customers. Water samples will be collected by the city to have tested by the Mississippi Department of Health.

Until the notice is lifted, customers are advised to boil all water for one minute before using tap water for drinking, cooking, brushing teeth, washing dishes, etc. Do not use ice that was made from tap water during the notice.

We’ve located a problem, and are isolating the break. Hope to restore water pressure soon. pic.twitter.com/8zAStaD5vq