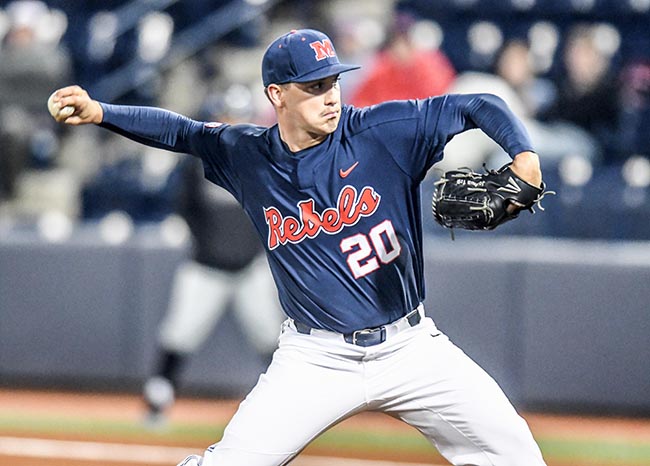 OXFORD – In a stylistic curveball to the typical brand of Rebel baseball through seven games, Ole Miss out-west-coasted Long Beach State on Friday night to open the three-game series. Winning 7-2, the Rebels advance to 6-2 on the year.

Long Beach has simply struggled to score runs this year. Entering Friday, the 0-7 team had scored just 10 runs. The Dirtbags play typical west-cost style baseball. They’re not going to hit the ball deep. Instead, they’ll dink and dunk you with contact and singles, stealing bases and bunting to try to get runners around to score.

“This past week we were working really hard on bunt defenses. We knew from playing them them last year, they were a team that likes to play that small game,” said Ole Miss catcher Cooper Johnson.

Friday night, Ole Miss took a night’s hiatus from their propensity to hit the long ball. They won by hitting seven eight to just one extra base hit. The Rebels also stole three bases.

Just about the only consistent arm in the rotation for Ole Miss, Will Ethridge was incredibly efficient in limited work tonight. Ethridge threw three scoreless innings, allowing just two hits and throwing just 32 pitches. Bianco pulled him just to make sure he wouldn’t re-aggravate a blister on his throwing hand that forced him to miss his regular start last week.

“I didn’t notice (the blister) at all,” Ethridge said. “It was just precautionary. I didn’t want to go out there and have it possibly tear up and miss another two weeks or something. I want to be ready for SEC play.”

Houston Roth was the first arm out of the pen for Ole Miss. Roth struggled in his first inning, giving up the only two runs on two hits and a walk. However, he settled in very well in the next inning, striking out two straight and popping up the third batter. Rebel skipper Mike Bianco said his right shoulder injury has still been affecting his command.

Austin Miller cleaned up the final four innings from the mound, allowing just one hit and no runs. He’s flown under the radar to start the year, but quietly has been the best bullpen arm. Miller now leads Ole Miss in innings pitched at 10.2 innings and has an ERA of 0.87.

Thomas Dillard’s preposterously hot start continued Friday night. Dillard went 2 for 3 at the plate with a walk, bringing his yearly numbers to .517 with 17 RBIs.

Ole Miss will play a double-header tomorrow with Long Beach to avoid potential inclement weather on Sunday. The first game starts at 1:30 p.m. with the second game 45 minutes after the conclusion of the first.

Position and scheme changes: a look at the new…