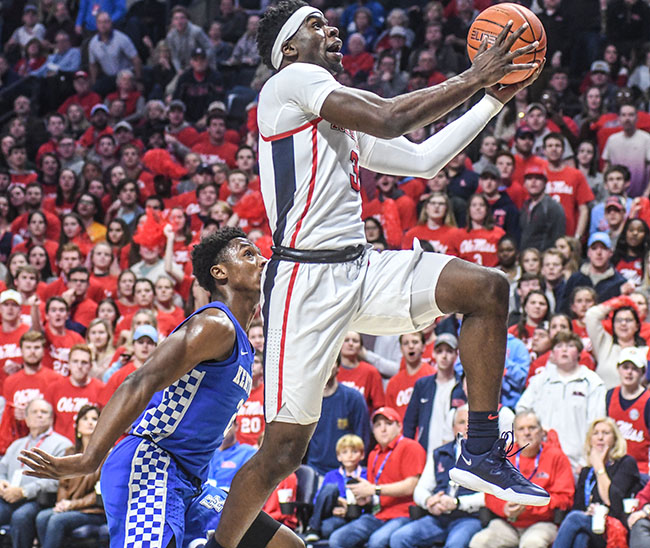 OXFORD – In front of a sold-out Pavilion crowd including the likes of Donte Moncrief, D.K. Metcalf, A.J. Brown and Morgan Freeman, Ole Miss was unable to hang with No. 6 Kentucky late. Pulling away over the final stretch, the Wildcats dropped Ole Miss 80-76. With the loss, Ole Miss falls to T-8th in the conference and has lost four of five for the second time this year.

“I’ve got a ton of respect for Kentucky and (Coach Calapari). It was a great college atmosphere on a national stage. I couldn’t be more proud of our fan base and our students,” said head coach Kermit Davis. “It was great to see how (Terence Davis) played on senior night. The only thing we didn’t do was win. He was terrific all game long.”

Neither team was able to gain control until late in the first half. The back-and-forth opening 13 minutes of basketball saw the lead change hands five times before Kentucky went on a 12-4 run over 2:54 of game time to secure the lead. However, Ole Miss answered with a 11-1 run of their own to take the lead with 3:07 to play in the half. The game would go to intermission with the Rebels leading 39-38.

Like the first half, Kentucky crawled out to an early but miniscule lead. A back-and-forth opening 12-minutes led to a five-point Kentucky lead. After an errant Terence Davis shot came up short, Bruce Stevens grabbed the offensive rebound and kicked the ball to Breein Tyree for a deep three. Good. Ole Miss got to 67-65 with that shot, but they would never get closer.

Ole Miss looked gassed and beaten down late against a Kentucky team that’s far more talented and bigger than them. Despite Ole Miss cutting the lead to three with 20-seconds to play and two with 5.9-seconds to play, the Wildcats were in control of the game down the stretch. Kentucky made just enough free throws to hold on and win 80-76.

“I just feel like we stopped running our offense. I took a few quick shots. There was one time it was a one-on-three – me and three Kentucky players. I just stopped and took a three-ball,” said senior guard Terence Davis. “We just have to make smarter plays down the stretch. Those are winning plays, pulling the ball back out.”

Kentucky’s inability to effectively shoot free throws kept Ole Miss hanging around for a while in the first half, but they hit them when they mattered. The Wildcats missed the front-end on three one-and-one situations in the first half but shot 12-15 from the line in the second.

The loss was the last home game at The Pavilion for three Ole Miss seniors, Bruce Stevens, Terence Davis and D.C. Davis. Coincidentally, it was also one of the best games of the year from Stevens and Terence Davis.

Defensively, this may have been the best game of Bruce Stevens’ career. He bodied up Kentucky’s best player, P.J. Washington all night. Stevens has struggled at times on the year, getting lost in zones, but tonight was man-heavy defensively and he excelled.

“His energy level is so much better. It’s helping us. He just has to keep going in that direction,” Kermit Davis said.

Terence Davis has showed up for big games all year. Tuesday was no different. He went off for 25 points and 12 rebounds, reaching his season average in points by the end of the first half. It’s no surprise Davis had a big game on the biggest stage. His previous three best games on the year, by a numbers perspective were games against Butler, Auburn, LSU and Florida.

If it weren’t a very weak year for bubble teams, Ole Miss would be fighting an uphill battle to make the NCAA tournament after what is now three straight losses and four losses in five games. Getting that tenth SEC win would go a long way for their resume. The Rebels will have one final opportunity to notch another SEC regular season win, a game Saturday at Missouri.