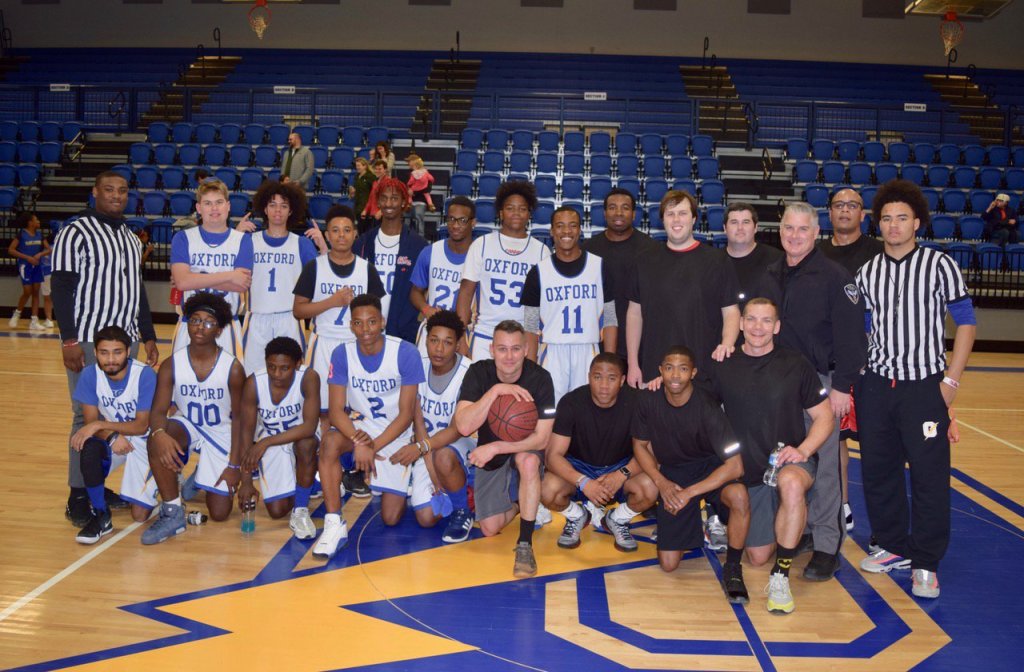 OXFORD – A three-point shot by Oxford’s Cecil Turner at the buzzer brought the Oxford Unified Sports basketball season to a conclusion with a 40-40 tie with the Oxford Police Department in an exhibition game.

Just a few days after winning the Special Olympics Gold Medal, the Oxford Unified Sports basketball team took on a team of police officers on Wednesday afternoon, coming back from an early deficit to tie the officers at the final buzzer.

Only a few months removed from the school’s inaugural game in December, it’s an impressive run for the Oxford team, going from just having started playing each other to a gold medal. They then topped that off with a very competitive game against a group of grown men from OPD.

“They’re playing more as a team now instead of individual. They’ve really grown as friends as well,” said Minnie Gates-Powell, the coach of the unified sports team and special education teacher at Oxford High. “Today is about spreading the word about inclusion. They’ve definitely included everyone.”

The Unified Sports team was billed as a season that would bring special needs students together with the general education student body to participate in sporting events throughout the year. In less than three months since their first game, Powell was really pleased with how the team grew.

For the Police Department, Wednesday’s game was a great and unique way of getting involved and giving back to the community, something the interim police chief had been challenging the staff with.

“About a month ago, (Police) Chief McCutchen got us all together and wanted us to figure out different ways to reach out to the community. I knew the Unified Sports team was playing here during lunch,” said Zach Anderson, OPD’s recourse officer at Oxford High School. “I just thought it would be fun to get a team together and get the school involved.”

The exhibition with OPD concludes the basketball portion of the unified sports schedule. Next up, the team will be competing in bowling.