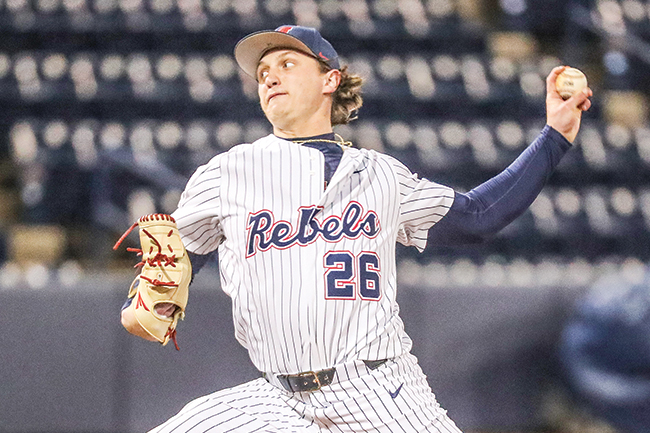 Ole Miss had averaged 8.7 runs per game entering Wednesday before the Pirates held them scoreless through eight. However, there were some positive takeaways from the game against ECU heading into a weekend series against 9-4 UAB.

True freshman Doug Nikhazy was truly exciting for much of the night. After giving up a hit on his first pitch of the night, the lefty retired the next nine batters in a row, striking out five. He struggled a bit in the fourth inning, giving up a three-run home run, but followed it up with a scoreless fifth.

Nikhazy was far from the most touted freshman pitcher to show up on campus over the summer. That role was reserved for Sunday’s starter Gunnar Hoglund, who was the Pittsburgh Pirates’ first round pick in the 2018 MLB Draft. Regardless, he’s beginning to turn heads. Bianco said after Wednesday start that Nikhazy was “terrific.”

The Saturday starting role in question, as lefty Zack Phillips has struggled in his three starts. Phillips has averaged only four innings per start and currently boasts an ERA north of 7.0. He’ll throw again Saturday, but there’s a good chance that role may be one filled by Nikhazy in the near future.

Mike Bianco stated in his media day press conference nearly a month ago that he liked the idea of throwing a lefty Saturday in-between right-hander Will Ethridge on Friday and Hoglund Sunday. Nikhazy would fit that mold.

Second base: Time for the Rebel bats to Rebound

Bianco said after the Long Beach series last weekend how people can be critical when you’re so good offensively – that people expect runs.

For much of the early season, Ole Miss has relied on two or three big innings on offense to swing a game. Those innings never came against ECU, however it’s still a team with a ton of confidence swinging the bat, and rightfully so.

Even after the rough outing Wednesday, Ole Miss has six batters with an average at .300 or higher and thirteen that have recorded an RBI on the year. The team is going to get hits.

The UAB team is giving up 4.7 runs per games to teams not nearly as talented in the batter’s box as Ole Miss. Expect the Rebels to come out swinging to boost morale after Wednesday’s tough loss.

Ole Miss will be without freshman utility man Justin Bench for about a month after fracturing his middle finger. Bench was hit in the hands by a pitch during Tuesday’s win over Arkansas-Little Rock.

Bench delivered the game-winning hit to clinch the sweep in last Saturday’s double-header against LBSU. On the year, he’s hitting 1 for 4 with a walk in six appearances.

At the Plate: Dynamic UAB Offense a test for pitchers

Coming into town Friday for a three-game series is UAB. The Blazers are playing very good baseball of late, with two of their four losses at Mississippi State and at Alabama.

It’s a lineup that is built to put up runs – they should be able to pressure an Ole Miss weekend rotation that is still rounding into shape. Four different batters for the Blazers have 18 or more RBIs, led by junior outfielder Colton Schultz. In 50 at bats, Schultz is hitting .400 with seven extra base hits.

Ole Miss will play three games with the Blazers over the weekend, before heading up north for their final, and toughest, test against No. 8 Louisville before the opening of SEC play next Friday.