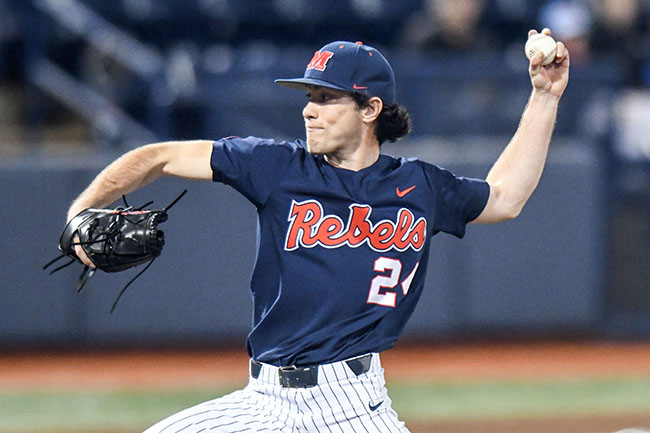 OXFORD – Saturday starts have been a sludge for Ole Miss on the mound. They’ve allowed 8.7 runs per game on Saturday, losing twice, entering tonight. However, Zack Phillips gave the Rebels some room for optimism from the hill going forward and Ole Miss had another big night offensively. They beat UAB 13-4 to advance to 11-4.

Like the night before when they hung 15 runs, the Ole Miss offense was buzzing from the start on Saturday. The Blazers pitcher came into the night posting an ERA of 2.0, but would get pulled in the top of the third inning in this one after allowing seven quick runs. The Rebels would hag double-digit on back-to-back days.

Ole Miss tacked on three runs in the second before adding another five runs in the third behind a Tyler Keenan homer. Cole Zabowski had a stellar day, adding to what has quietly been a really good year for the first baseman. Zabowski went 3 for 4 on the night with four RBIs, pushing his season average to .327.

“It’s just sitting on the fastball, trying to get and hunt that fastball. That’s what most of the team is doing right now and that’s what we preach,” Zabowski said. “That’s what our offense is capable of.”

Saturday was hands-down the best outing of Zack Phillips’ Rebel career. Coming into the night, he was posting a 7.50 ERA and was yet to go longer than 5.0 innings in a start. Tonight, he pitched a full 7.0 innings, giving up six hits and allowing just one earned run.

Over the course of just a week, Phillips added a new pitch. Tonight, he threw a slider for the first time all year, and did so very, very well. Bianco said he threw the pitch 8 of 10 times for strikes, Phillips said 16 of 18.

“It’s just them trusting their stuff and believing. You get out here and sometimes a little doubt creeps into your mind. I think there’s time that you don’t trust your stuff,” said head coach Mike Bianco. “I thought he pitched more like he’s capable of pitching.”

In a less-than-ideal dynamic, the Rebels allowed a run on another error in the first inning, after committing three errors in the first inning of Friday’s game. Phillips’ only earned run came on a solo-shot home run in the third inning. A positive outing for Phillips was needed, seemingly locking in his Saturday start in the SEC opening series next weekend.

Tyler Myers gave up a two-run home run in the eighth inning in two innings of relief.

Ole Miss returns to the diamond Sunday at 1:30 p.m. to close out the UAB series.