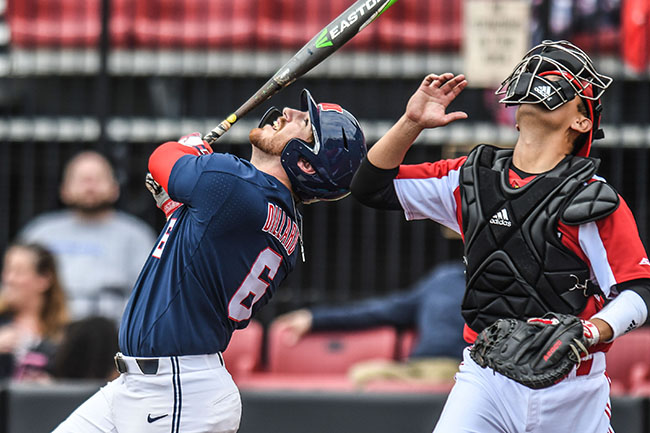 Louisville (13-4) got on Ole Miss’ Houston Roth early on Wednesday afternoon, scoring five in the bottom of the first inning. They needed to survive a late scare by Ole Miss in the top of the ninth to complete the two-game sweep, winning 10-8.

Tuesday evening, Ole Miss (12-5) scored three in the top of the seventh inning, kicked off by an RBI double by Kevin Graham. Going to extra innings tied 3-3, Louisville would walk-off the game, scoring on an RBI single from Zach Britton to win 4-3.

Wednesday afternoon’s game was much less of a pitching showdown. Ole Miss drew three walks in the opening frame of the game, taking a 2-0 lead into the bottom of the first. Things quickly got out of hand.

Grae Kessinger got things started defensively with a beautiful spinning play at shortstop to put away the first Louisville batter before the next six Cardinals would successfully reach base. The second Louisville batter doubled before Ole Miss starter Houston Roth hit the next two.

Roth was pulled, replaced by Max Cioffi, after just 0.2 innings of work as Louisville put 5 runs on the board in the first inning. Cioffi gave up three more runs in his 2.1 innings, simply putting the game out of reach for Ole Miss. Louisville scored at least one run in five of the first six innings of play.

Before Wednesday’s outing, Roth had not pitched in nearly two weeks. He has been struggling through an AC Joint injury in his shoulder, one that limited him two weeks ago against Long Beach State before the coaching staff decided to shut him down until healthy.

Ole Miss had a chance in the top of the eighth on Wednesday to make things interesting. The Rebels loaded the bases with one out, before a Tyler Keenan two-RBI single cut the lead to 10-5. Thomas Dillard grounded into a double play with runners on the corners to end the inning.

A two-run homer by Cooper Johnson in the top of the ninth cut the lead to 10-7. Pinch hitting, Tim Elko hit a solo-shot to make it 10-8 before Louisville would get Jacob Adams and Grae Kessinger out to end the game.

The Ole Miss bats were never able to live up to their potential in Kentucky. Thomas Dillard and Ryan Olenek have proven to be the most consistent hitters for Ole Miss, both hitting over .400 before this series. On the series, the two combined for two hits on 16 at bats.

Games at Louisville were the final tune-up for the Ole Miss squad, as they start SEC play on Friday with a three-game series against Alabama, in Oxford.

Rebels Drop Heartbreaker to No. 7 Louisville in Extra…