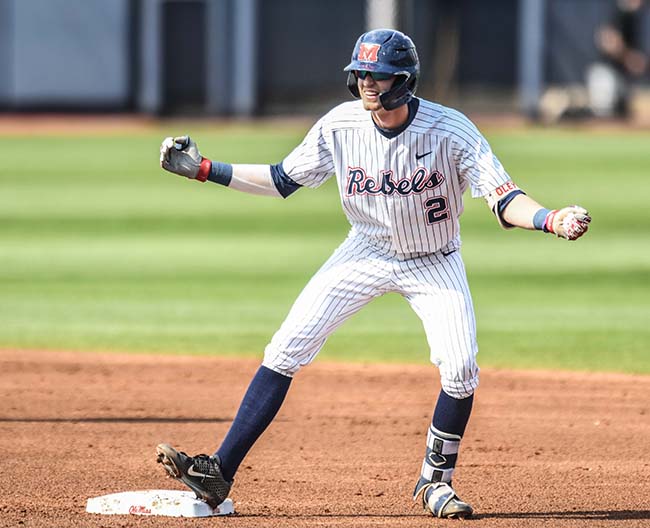 OXFORD, Miss. – Ole Miss baseball delivered Wednesday with a historic day at the plate and on the mound, as one offensive-powered inning early in today’s game versus Arkansas-Pine Bluff helped jumpstart an onslaught of runs in a blowout 25-0 victory over Arkansas-Pine Bluff.

While the Rebels racked up 25 runs on the offensive side, the pitching staff shut it down on the mound, and four Ole Miss pitchers worked to the first combined no-hitter in school history, and the first no-hitter since Russ Johnson last accomplished the feat in 1966.

The Golden Lions didn’t even have their first baserunner until the fourth inning, and even he reached solely on a dropped third strike. Zack Phillips was tremendous in his first start since transitioning to the midweek role, but he was only asked to work 3.0 innings after the Rebel offense put things away early in the ballgame.

Four home runs capped an eight-run third inning, including long balls from Kevin Graham (2nd), Knox Loposer (1st), Tyler Keenan (6th) and Thomas Dillard (8th). The Rebels would go on to hit six home runs on the day, with another from Keenan and the first of Josh Hall’s career, which is the most since at least the turn of the century.

Twenty-five runs are the most for an Ole Miss team since they last plated 25 against Southern Miss in April of 2003, and 21 hits is the most since they also hit 21 against Kentucky in 2016. Ole Miss has now scored double-digit runs in three straight contests.

Twelve Rebels entered the stat box with a hit today, the most on the year, while eleven also added an RBI to their day’s total.

Troublesome opponent pitching jump started the offensive bonanza for the Rebels today, as three first-inning walks translated to three quick runs in the first frame, but the real work began in the third inning. Graham led off the inning with a home run, which was quickly followed by a solo shot from Loposer, for back-to-back long balls from a pair of freshmen.

Keenan and Dillard would then go back-to-back four batters later, for the third and fourth homers of the inning, respectively. Grae Kessingeradded an RBI double, while Graham came around to bat again and scored another run on a double to right-center.

The Rebels would go on to plate at least six runs in the fourth and fifth inning, as a powerhouse lineup refused to relent against the Golden Lions pitching staff. Keenan would grab his second homer of the day just an inning later, as a part of his 5-for-6, seven-RBI day, while an unlikely hero in Hall would nab his first career home run in the bottom of the fifth with a two-run line drive over the right field wall.

Tim Elko drove in a run as part of a seven-run fifth inning with his first career triple, but the Rebels were far from done, and would go on to drive in 25 runs, tied for the most RBI in school history, before the end of the fifth inning.

On the mound, Kaleb Hill was the first arm out of the bullpen, and carried the Rebels through 2.0 scoreless innings. He matched Phillips with an even four strikeouts and ensured the no-hitter was intact through the end of the fifth.

Pierce Smith was called upon next in his first appearance of the year, and was able to go 1.0 inning with his first strikeout of the season under his belt. Taylor Broadway was asked to relieve Smith after the latter experienced some trouble in the seventh, and struck out the only three batters he faced in the inning.

The Rebels, up 25 at the midway point of the seventh, then closed out the ballgame following an agreed-upon 10-run rule after seven innings.

Following today’s historic game, the Rebels will hit the road to take on Missouri this weekend for the second SEC series of the year, with a Friday night first pitch set for 6 p.m. CT.