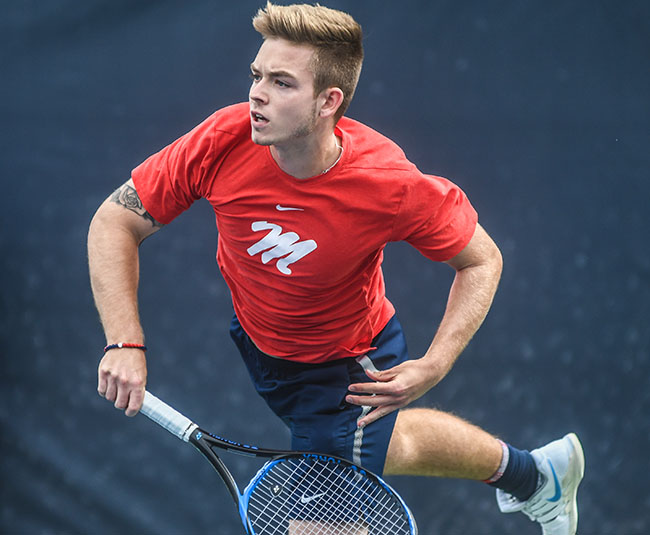 OXFORD, Miss. —  Ole Miss Men’s Tennis split its Sunday contests, dropping a 4-2 decision to No. 19 Tennessee before bouncing back to sweep Jackson State in the finale at Palmer/Salloum Tennis Center.

Sunday marked the return of the ‘dynamic duo’, as the doubles pairing of senior Fabian Fallert and sophomore Finn Reynolds returned to the lineup for the nightcap vs. Jackson State. Fallert and Reynolds have ranked in the Top 5 all spring after a superb fall season, and currently sit at No. 14 in the latest ITA Rankings release.

The Rebels came out strong, picking up the doubles point for the second time in as many matches.  The duo of Fallert and sophomore Cotter Wilson dominated on Court 3, picking up the first three games and eventually clinching the point at 6-3 after deuce point.

The new pairing of junior Tim Sandkaulen and Reynolds also held a steady lead, up by three games at 3-1. They provided the set up for the doubles point after superb play from Reynolds, first firing a volley to bring the Rebels to deuce point, and then placing a perfectly located ball on the far inside corner.

Reynolds was the only Ole Miss player to win his opening game, with the other five singles positions left battling from behind, including senior Filip Kraljevic, who rallied from an 0-3 deficit to tie things at 3-3 before eventually dropping the opening set 4-6.

Freshman Simon Junk was the lone victor in singles play for the Rebels, triumphing through a 7-5 opening to coast to a 6-1 second set and earn his second SEC win of the season.

Again, the Rebels gained the early advantage via the doubles point. Sandkaulen and Wilson teamed up to sweep the second position, while Fallert and Reynolds prevailed 6-4 on Court 1.

Ole Miss carried the momentum over to singles play, where each Rebel picked up their opening game.

Junk carried over the momentum from his earlier match, sweeping the opening set on Court 4. Five of the six Rebels in total won their first set, and the Rebels quickly came one point away from clinching after Junk and Sandkaulen finished at nearly the same time.

The match was clinched by veteran Fallert, moving Ole Miss back into the win column.

Ole Miss will host Arkansas on Thursday at 6 p.m. at Palmer/Salloum Tennis Center. The Rebels’ two seniors, Fabian Fallert and Filip Kraljevic, will be honored prior to the match. There is also a free crawfish boil for the event.