Ole Miss falls down to Earth: Takeaways from Kentucky taking two of three from the Rebels on the diamond 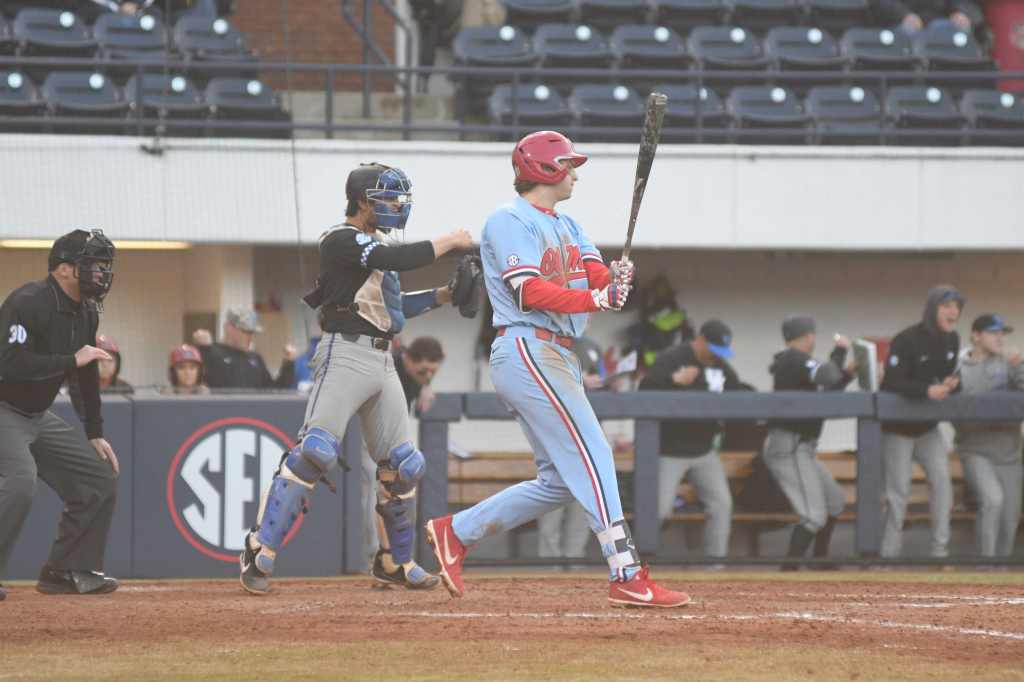 Kentucky catcher Marshall Gei, left, celebrates a win over Ole Miss after Cole Zabowski struck out with the bases loaded to end the game in Game 2 of a doubleheader, at Oxford-University Stadium in Oxford, Miss. on Sunday, April 14, 2019. Kentucky won 4-2. (Bruce Newman, Oxford Eagle)

The Rebels were playing some of their best baseball of the year as they prepared to host a Kentucky team that was just 2-10 on the year in SEC play this past weekend. This went to plan early, beating the Wildcats 8-2 on Friday behind a gem of a night from starting pitcher Will Ethridge. In a doubleheader on Sunday, Ole Miss dropped two games to the lowly Kentucky team, failing to accumulate much offense in the process.

Now at 9-6 in conference play, Ole Miss dropped to No. 15 in the D1Baseball rankings entering the new week. Here’s some things to draw from the relatively unexpected series loss to Kentucky.

1. Don’t overreact to one series

Ole Miss has been here before, where they followed up some of their best baseball with a befuddling game or series. Just two weeks ago, Ole Miss was riding high, having taken two of three games on the road from No. 8 Arkansas, before dropping a mid-week game to 5-21 North Alabama.

The Kentucky losses aren’t as bad as the North Alabama by any means, but they’re certainly not good on a resume for a team that now seems like a bit of a longshot to host a regional. However, Ole Miss has bounced back before. They’ve shown that these lulls won’t affect them long term.

After losing to North Alabama, the Rebels came out and swept Florida in dominating fashion. It’s not the most consistent Rebel baseball team by any means, but it’s one that’s shown the resiliency to rally quickly. Ole Miss will need to do just that, facing a Memphis team they narrowly beat on the road a few weeks back, before traveling to Auburn on the weekend.

We touched briefly on this last week, but Kessinger has not only maintained his streak, but is getting even better. Kessinger hit a lowly .255 over the opening 25 games of the year. Over his last twelve games, there may not be anyone hotter in the country. Kessinger is hitting .532 in that twelve-game stretch and is averaging one RBI per game. Against Kentucky over the weekend, he went seven for ten, hitting his first home run in SEC play.

B5 | Grae Kessinger doubles down the third base line and we have a ball game!

Mother Nature seemingly played her part on the weekend for Kentucky. Saturday’s game ended up being postponed until Sunday, leaving Ole Miss and Kentucky two, seven-inning games on a Sunday doubleheader.

A big part of Ole Miss’ pitching success for most of the year has come in the bullpen. Austin Miller, Tyler Myers and Parker Caracci, especially, have been very good in SEC play out of the pen. The shortened games lessened the importance of one of the bigger Rebel advantages in the series.

Kentucky was able to throw their ace Zack Thompson, a likely first round pick in the upcoming MLB Draft, nearly an entire game Sunday, knowing it was just seven games. Head coach Mike Bianco downplayed the effects of the seven innings games afterwards, but it clearly showed it’s head on the weekend.

Thomas Dillard raked in non-conference game. He was the best Ole Miss hitter over the course of the opening month, and it wasn’t even particularly close. While it’s common – and sort of expected – for hitters to experience a decline entering conference play with better pitchers, Dillard’s drop off is sort of staggering.

In 20 games against non-power-five teams, Dillard hit .418, driving in 27 runs and hitting eight home runs. In 17 games against SEC opponents plus No. 8 Louisville, Dillard is hitting just .262 with eight RBIs and one home run. He’s been feasting off of mid-week games and slower pitching, but struggling against aces in the SEC – something he needs to figure out moving forward.

Ole Miss will host Memphis at home on Tuesday night, before traveling to Auburn over the weekend for a three-game series with the Tigers.