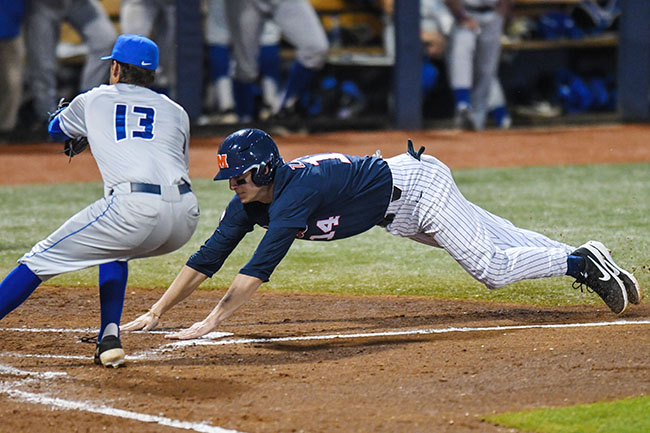 Hosting Memphis less than one month after traveling to their place, Ole Miss did just enough on Tuesday evening to put away the Tigers, completing the two-game sweep by a final score of 5-2.

Memphis starter Danny Denz struggled with command early, walking four of the first twelve Ole Miss batters. However, he made it through three innings scoreless before being pulled, which is more than you could say for his replacement, Bailey Wimberley.

Replacing Denz to start the fourth, Wimberley allowed four Ole Miss runs in the fourth, the first runs of the game. Cole Zabowski got the runs started with an RBI double to score Cooper Johnson. Ole Miss got small after that. Servideo reached base on what looked to be a sacrifice bunt, beating out the throw to first. Josh Hall brought Servideo in later in the inning for run four on a suicide squeeze.

“We got a couple bunts down, that’s more bunts than I think we’ve had all year in one game,” said head coach Mike Bianco. “We have two guys that are able to do it and that was part of the big inning, part of the reason we won the game.”

Ole Miss starter Zack Philips made quick work of the Tigers early, failing to give up a hit until the fourth inning. Memphis tagged one run on Phillips in the fifth, before Hunter Goodman hit one a country mile to straightaway center to cut the Rebel lead to 4-2. Goodman’s homer hit off the center point of the wall beyond center field, a hit that easily traveled 410-plus feet.

“I felt really good today. Everything was working in the bullpen. I just wanted to come out and command the zone,” Phillips said.

Phillips made it the full six innings, his longest outing since a 7.0 inning game against UAB on March 9, before Houston Roth took over. Roth’s time on the mound was, let’s say, short lived. He allowed two of the first three batters faced to get on base before being pulled for Austin Miller, who worked Ole Miss out of the jam.

Grae Kessinger’s seventh inning run iced the game for Ole Miss. Miller through a hitless 1.2 innings before giving way to Parker Caracci who finished the game.

With Ryan Olenek out with a hip injury, freshman Josh Hall got his first start for Ole Miss on Tuesday. He went 1-2 on the night, brining in Anthony Servideo on a bunt in the fourth, and also drew a walk.

“I found out (I was starting) right before batting practice,” Hall said. “It was definitely fun. You could tell in the locker room I was excited and kind of nervous.”

Hall said he is preparing as if he could start again this weekend. It wasn’t a pretty win for the Rebels, but a win nonetheless. Ole Miss totaled just three hits on the evening, in part due to the fact that Memphis walked ten batters.

With the win, Ole Miss advances to 26-12 on the year. They will go on the road this weekend for a series with Auburn.