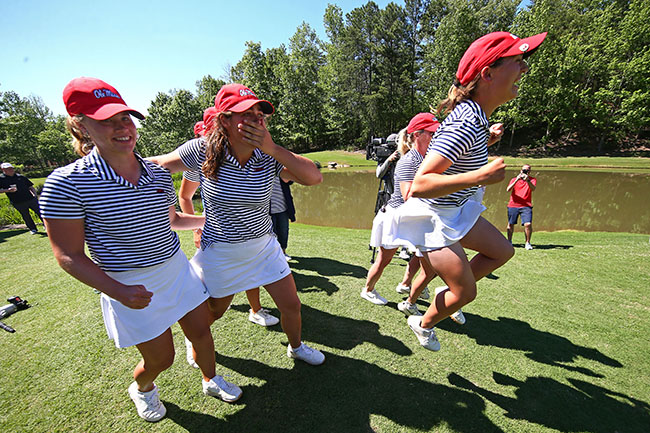 BIRMINGHAM, Ala. – For the first time in program history, the Ole Miss women’s golf team is the champion of the Southeastern Conference after defeating South Carolina, 3-2, in the finals of match play on Sunday.

“I think this puts us on the map a little bit,” said Ole Miss head coach Kory Henkes. “I know we were the underdog coming in all week. We kept telling the girls to grind it out and stay patient, hit fairways and greens and make your pars. I’m so excited and so proud of this group. This is unbelievable.”

Macy Somoskey, who won each of her three matches this weekend in a playoff, defeated the Gamecocks’ Lois Kaye Go on the 22nd hole to claim the conference title for the Rebels. Seven hours earlier in the day, Somoskey defeated Georgia’s Marta Perez for a berth in the finals for Ole Miss.

South Carolina got the first points of the day when Ana Palaez defeated Ellen Hutchinson-Kay, 6-and-5. Shortly after, Kennedy Swann got Ole Miss on the board after defeating the Gamecocks No. 1 player, Emily Price, 2-up.

Swann won the first hole of the match before Price tied it up on the second hole. Swann retained a two-hole lead throughout the back-nine when Price cut it back to one at hole 17. However, she didn’t let that phase her down the stretch. After laying up on 18, Swann stuck it a couple feet to the hole and a par would be enough to get the first Rebel points of the afternoon.

Julia Johnson finished 3-0 in match play on the weekend after defeating Marion Veysseyre 2-up. Johnson had control of the match early, holding a 2-hole lead through the beginning of the back nine. Veysseyre tied the match after winning at 15 and 16, but Johnson stayed strong, winning the last two holes to give the Rebels a 2-1 lead over South Carolina.

Conner Beth Ball went down early but fought hard against Anita Uwadia the whole way. Ball was three-down through eight holes, and got it back to even on hole 14 thanks to a great chip by the side of the green to make par. The match went back-and-forth and came down to 18. Uwadia eventually won it for South Carolina on a par that set the stage for the sudden death matchup with Somoskey and Go.

Somoskey went 22 holes toe-to-toe in dramatic fashion with South Carolina’s Lois Kaye Go. She was down most of the match but clawed back into it on the back nine, winning hole 15 to be just one-down with three to play. It all came down to the 18th green, when the freshman made the shot of the day. She sunk a long, winding putt to force a playoff from the top shelf of the green. The pair made pars on the first three playoff holes on 16, 17 and 18 that required some clutch putts.

It once again came down to 18, and when Go hit it in the water going for the green on their second shot, Somoskey played it safe laying up and landing it on the green. The Gamecocks missed the par putt to extend the match, handing the Rebels their first conference title in program history.

Somoskey played 62 holes of match play throughout the weekend and turned in three match deciding victories for the Rebels.

“It was just taking it one step at a time out there,” Somoskey said. “First step was getting to match play. We grinded it out against Florida yesterday and Georgia this morning. We got the job done against South Carolina, and it’s just unbelievable.”

The Rebels will learn their postseason regional site during the NCAA Selection Show this coming Wednesday, April 24, at 4:30 p.m. CT on Golf Channel.