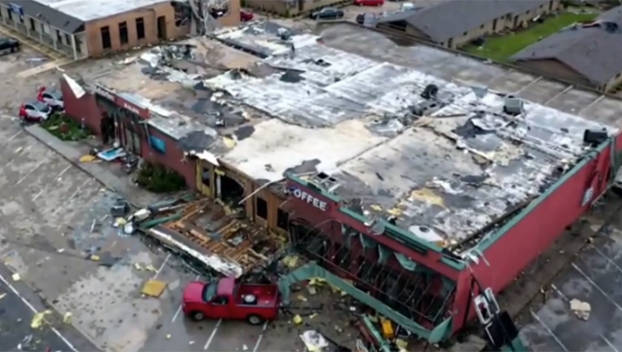 Mother and son killed in tornado in northern Louisiana

A mother and son in Lincoln Parish, which Ruston lies in, were killed when a tree fell on their home overnight, said Mike Steele, communications director for the Louisiana Governor’s Office of Homeland Security and Emergency Preparedness.

Steele said he could not confirm their names or ages. He said those were currently the only deaths reported in Louisiana during the storm, but that rescue workers were still combing the area.

Ruston Mayor Ronny Walker took a helicopter flight over the town of about 24,000 people Thursday morning.

“The number of houses with trees completely through them was incredible,” he said.

The tornado was part of a severe weather system that pounded Texas with rain Wednesday, killing a woman and two children caught in flash flood waters.

National Weather Service hydrologist C. S. Ross said it appears the tornado cut a track over 130 miles (209 kilometers) from eastern Texas to near the Louisiana-Arkansas border.

At Louisiana Tech University, classes were canceled Thursday and Friday, the university said on its Twitter account. The university said no students were reported injured, but that trees and power lines were down in several places on campus. They also warned worried parents trying to reach their children that it might be hard to reach students because of the high volume of calls.

The university’s president, Les Guice, asked people to stay off the roads unless necessary.

“We are still assessing damage to campus due to the tornado. Power lines are down and a lot of debris is as well creating safety hazards,” he said on Twitter. He said the core academic buildings were in “good shape” although trees were down around campus.

The four-year university has about 12,000 students, and many people in the town of Ruston work at the university.

The storm moved into Mississippi on Thursday morning.

Louisiana Gov. John Bel Edwards said on Twitter that state police and the Louisiana National Guard were assisting local responders and that he was travelling to Ruston to assess the damage.

Underage drinking is something every city in the country tries to combat. With two high schools, a college and a... read more