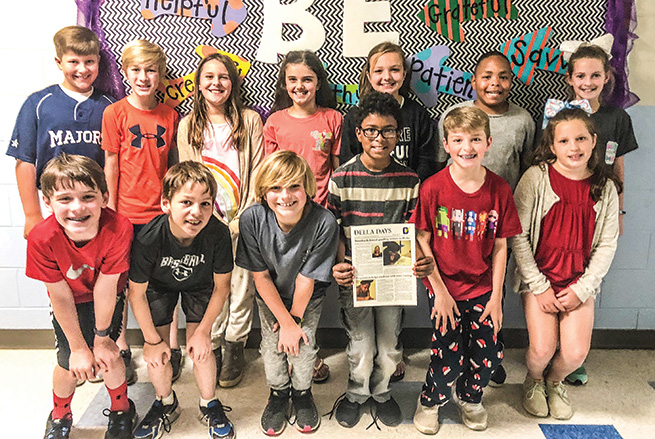 Students at Della Davidson Elementary have developed their own newspaper, in Oxford, Miss. on Friday, April 26, 2019. (Anna Gibbs, Oxford Eagle)

The paper, called Della Days, was created by students in the school’s Insights class, under the direction of Dr. Sarah Rowlett and Laurie Beth Ellis, with guest advisor Beth Fitts. Students in the class learned how to take photos, conduct interviews with open-ended questions and write hard news stories on a variety of subjects.

It’s a project student reporter Alice Wilkes said helped to get students out of their comfort zone. Wilkes wrote a story about the school’s Walking Wednesday event, and the interview techniques she learned in class came in handy.

Beth Fitts, a former teacher at Oxford High School, said she wanted to introduce students to the craft at a young age so they can begin to understand the impact of journalism on society.

“I taught journalism for 27 years, and it’s important. It is the foundation of what we have in America,” Fitts said. “So, when you start with kids this age, there’s no telling what kind of opportunities will open up for them.”

Fitts described the final product as a team effort between the educators and students, and said all story ideas came directly from the children, and were developed based on traditional principles of journalism.

For student reporter Hayden Hall, finding a story that mattered to fellow students was the fun part of the project. Hall interviewed DDES P.E. teacher and Oxford High School assistant softball coach Steve Blackmon as part of his story on the health benefits of baseball.

“Writing the article in the right order, organizing it, was the most challenging part of the project,” Hall said. “But I learned that you have to speak loud when you’re interviewing, so you can be heard and hear yourself on the recording. I’d never interviewed anybody before, but I hope I get to do it again.”

Hall said his favorite part of the project was interviewing Blackmon, and that he wants to be a journalist when he grows up.

In addition to writing, the students also spent part of the project learning how to take high-quality photos that related to their stories. Upon seeing the finished product, Fitts said she was pleased that the students’ responsiveness to their lessons could shine through on the page.

“What’s so neat is, the children have embraced everything,” Fitts said. “When we went out and taught photography, we were teaching how to make a good picture, not just how to point and click. And you can see evidence of that lesson in the finished product. They made some really good pictures.”