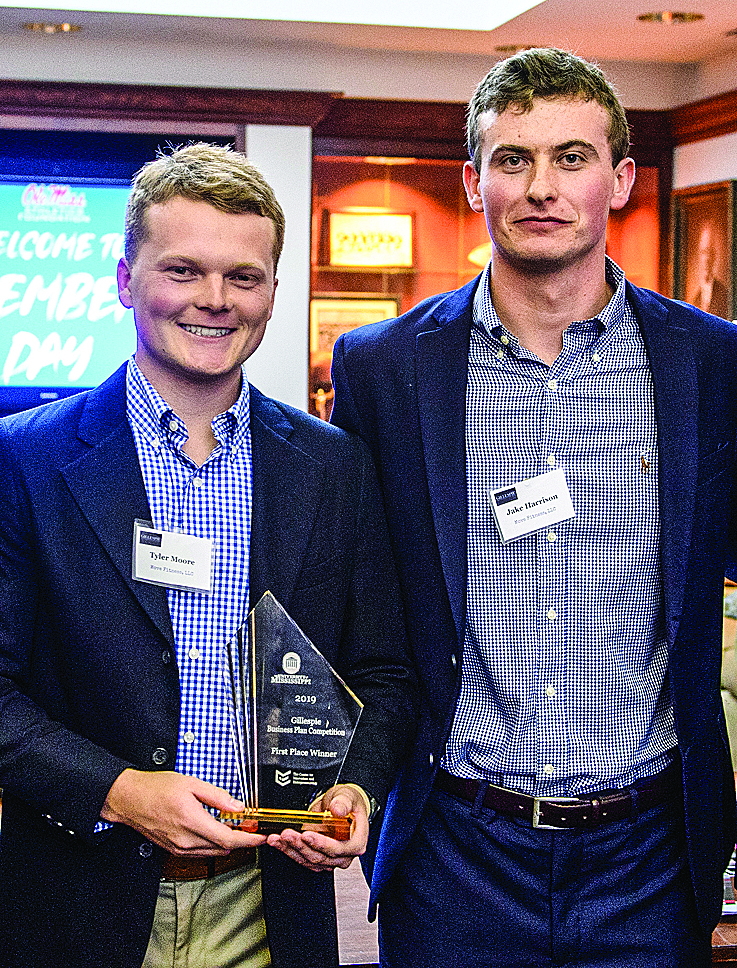 When most Ole Miss graduates walk across the stage to accept their degrees on Saturday and move on to jobs elsewhere, Tyler Moore and Jake Harrison will be sticking around in Oxford to try and get their new business off the ground.

Winning the Gillespie Business Plan Competition for their work on GluteMove, a fitness device, Moore and Harrison are using the prize money to help the launch of their startup, Move Fitness, LLC.

The two came up with the product idea for GluteMove a little over a year ago, in January 2018. The relatively simple device consists of two plastic sliding platforms, one under each foot, connected by two resistance bands. Targeting muscles in the glutes and thighs, the user operates the device by sliding against the resistance bands in a way that targets those muscles.

“We just had the idea of doing something different workout-wise. We were tired of our normal workouts and just wanted something different,” Moore said. “We thought of this out of nowhere and week-by-week we just progressed it more to where we are today.”

It’s not a high-priced lifting machine one would find at some gyms – according to the pair, they can make the product for just $20.

For two people working on a fitness startup, Moore and Harrison theoretically a good pairing. Moore was a business major, while Harrison studied exercise science. While not remotely a scientific study, Harrison tested out the product compared to basic resistance bands in a neuromuscular laboratory at Ole Miss, finding in limited experiments that their product increased muscle activation in the target areas by as much as 30 percent compared to resistance bands.

“It was big for validation of our product. For so long, it was just me and Tyler knowing about it and we were paranoid of showing other people. So the validation was huge,” Harrison said. “And then just meeting people and networking, finding people in fitness than can help us out is huge.”

The two said the competition has really helped aid them in connecting with potential local and alumni investors. That’s the real next step – raising capital. Nearly all, the money from the competition will go towards creating a mold for the product so it can go into production. They currently have one prototype, but that’s about it.

“We’ve had people that we know work out a lot use it and personal trainers around Oxford use it,” Harrison said. “Everything we’ve heard has been positive and they see the market for it.”

They’re targeting specific Instagram accounts, primarily those with large followings dedicated for women and working out. The pair explained that they plan to play a fee to those accounts that have a few hundred thousand followers or more, for the accounts to help them promote the product.

After more than a year of working together, Moore said it’s remarkable how far he and Harrison have come.

“The first prototype was a Macbook laptop case,” Moore said. “We pretty much just poked a hold in the box and ran a resistance band through it. I just showed it to Jake and it went from there.”

Instead of pursuing standard jobs after graduating, they’re sticking around. They have a few more ideas on deck, but getting the flagship GluteMove on the market is the first step. The final product is expected to sell for around $70 to $100. The goal, Moore said, is to start making prototypes by August.