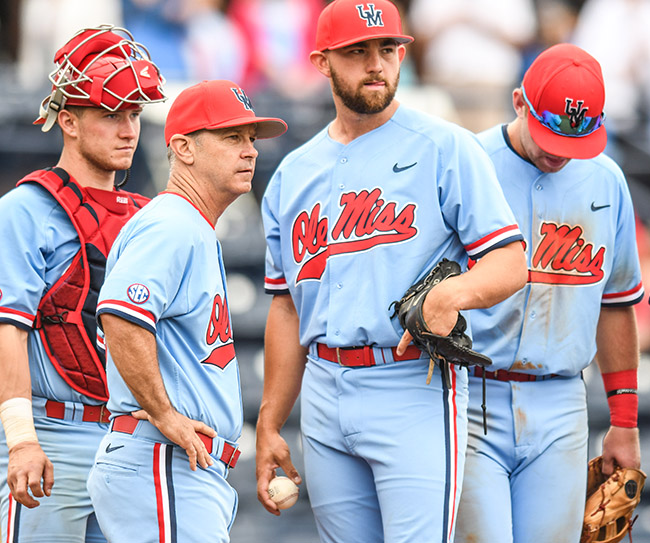 OXFORD – Another day at Swayze Field and another long, big inning for Mississippi State that doomed the Rebels.

Ole Miss gave up nine runs in a fourth-inning blowup, losing game three of the series 11-5 to the Bulldogs. With the three-game sweep, Ole Miss is now 2-14 against Mississippi State dating back to 2016 and 0-6 at Oxford-University Stadium.

“It’s a really bad weekend for us. It’s just a shame,” said head coach Mike Bianco. “So much riding on the weekend and you’re playing your arch rival and you just play awful.”

For the second game in a row, Ole Miss scored first and held a slim lead mid-way though the game before the bullpen imploded. Again. After giving up six runs in the seventh Saturday night to blow a two-run lead, Ole Miss decided they were going to one-up themselves on Sunday.

Gunnar Hoglund’s start didn’t last long. After making it through the first inning throwing just seven pitches, he would be pulled from the game with two outs in the third inning. At the time, there were three runners on, two outs, with the game tied at two. Zack Phillips came in to relieve Hoglund, and things spiraled out of control.

Despite having two outs, the next ten Mississippi State batters reached base. Nine runs scored. Every single Bulldog batter scored in the inning. When the massacre ended, and Rebel pitchers mended their wounds, four of the runs were charged to Hoglund. Two runs were charged to Phillips and three to Max Cioffi. Phillips was pulled without recording an out. Mike Bianco just let Cioffi stew on the mound, despite the nightmare that was ensuing, before he recorded the final out to end the slaughter.

Regardless of the bullpen struggles, Ole Miss also struggled to string together much offense the entire series. Sunday, it was Peyton Plumlee doing his best Ethan Small impression for the Bulldogs. Plumlee went 7.2 innings and allowed just three runs for Mississippi State. At one point he retired 14 straight Rebel batters, notwithstanding two errors mixed in.

“Not competitive enough at-bats, one through nine,” Cooper Johnson said. “We never got the big hit. We didn’t set inning up enough but we never got that big hit that we usually get.”

The best Ole Miss chance for a big inning Sunday came in the eighth. The Rebels notched two, two-out runs in the inning that ended with Anthony Servideo taking a ball deep to the warning track. Five more feet on that ball and the Rebels could have been looking at a five run inning and a very different game.

Ole Miss and Mississippi State came into the weekend tied for second in the SEC West at 15-9. Three days later, Ole Miss is now 15-12 and tied with LSU for third in the West. Any odds at a bye in the SEC Tournament are all but out the window at this point. There’s a good chance this was the last baseball game played at Swayze Field this year.