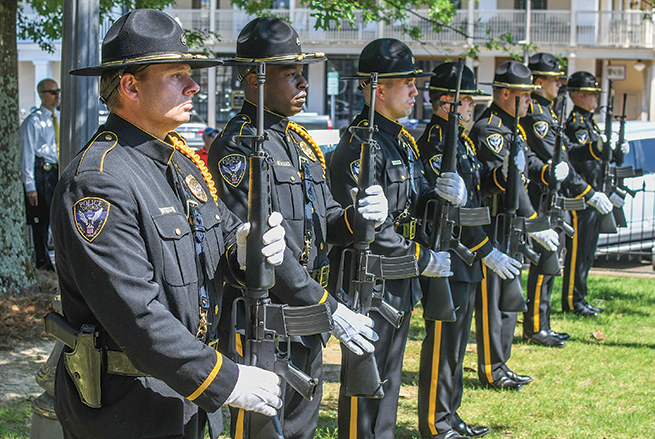 The event took place on the Lafayette County Courthouse lawn and was in conjunction with National Police Week.

Bo Prince of the Lafayette County Sheriff’s Department served as the master of ceremonies, which featured a 21-gun salute by the Oxford Police Department. OPD’s Mounted unit presented a rider-less horse during the ceremony as well.

“It kind of puts everything in perspective and it’s really unique because the community really pours out support to you (this) week,” Interim Oxford Police Chief Jeff McCutchen said. “It reminds you of how much you’re loved and how much of an impact you’re making. …Then the somber side of it comes in and reminds you of your fellow service members who have lost their lives and what it means to their family and how difficult the job is.”

Mike Quarles, the U.S. Marshals Gulf Coast Regional Task Force commander, was the guest speaker for this year’s ceremony. Quarles touched on officers who lost their lives in the line of duty, including Biloxi police officer Rober McKeithen who was ambushed and shot to death in the parking lot outside of the Biloxi Police Station while fixing a flat tire last week. He also referenced a quote by the late Paul Harvey.

“A police officer must be a minister, a mentor, a social worker, a diplomat, a tough guy and a gentleman all at the same time,” Quarles said.

Toward the end of the ceremony, representatives from OPD, Lafayette County Sheriff’s office, University Police Department and the U.S. Marshals service gave a report on officers who were seriously injured or lost their life in the past year. OPD, UPD and the sheriff’s department all reported zero injuries or casualties by their officers in the line of duty.

McCutchen noted the mutual respect the community and the local law enforcement agencies have for one another as a reason there has not been loss of life, on either side.

The ceremony concluded with the playing of Taps.