Ole Miss baseball wins one game in Knoxville, No. 7 seed in Hoover 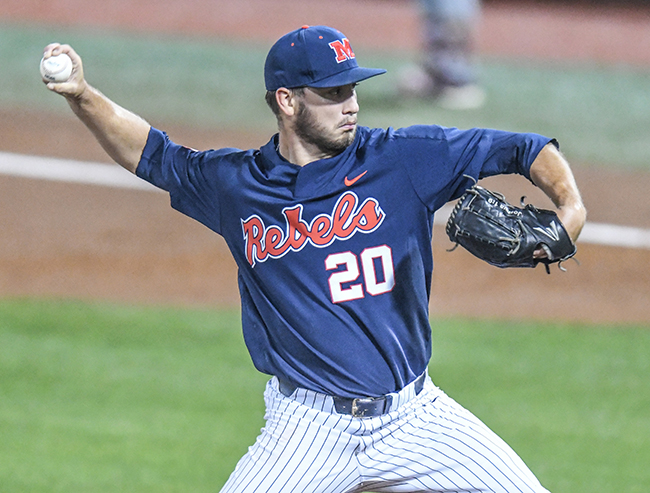 Mississippi's Will Ethridge pitches against Mississippi State at Oxford-University Stadium in Oxford, Miss. on Friday, May 10, 2019. (Bruce Newman, Oxford Eagle via AP)

Entering Saturday’s game-three in Knoxville, Ole Miss had dropped six games in a row. After Saturday’s 5-4 win over Tennessee, they’ll be riding into the SEC Tournament with the taste of victory on their lips for the first time since May 5.

Ole Miss lost their first two games this weekend in Knoxville 7-0 and 7-5. They needed the best outing of the year from freshman Gunnar Hoglund on Saturday to pull off the 5-4 win, their first since the sweep of LSU.

Gunnar Hoglund went six innings in Knoxville, tying his longest outing of the year. He allowed just five hits and three runs, walking one. The final line doesn’t really do justice to the fantastic outing he had. Hoglund allowed just one run on four hits over the first six innings of play. Hoglund gave up two hits before being pulled in the seventh inning with no outs. Both runners scored and Hoglund was credited with three runs surrendered.

Getting longer outings from Hoglund, like this one, could be critical for the team moving forward. Hoglund has been very good the first time through lineups this year. However, where he’s struggled is working through the order a second time. This is the reason the freshman has ten starts that don’t even make it to the fifth innings.

Saturday was different. Hoglund made it through the Tennessee order twice without much trouble, getting hung up the third time. It’s a significant improvement for the freshman that was a first-round pick last year, and a positive sign as the Rebels move to postseason play.

Ole Miss got three of their five runs in the Saturday win off a Tyler Keenan home run in the third. Interestingly, one of the Rebels the homer brought in was Thomas Dillard, hitting leadoff this weekend for the first time this year. The lineup change, moving Dillard to the one-hole, is quite a big shift for Mike Bianco, who has been very ridged in his roster construction so far this year.

Maybe the changes ignited some sort of a fire inside the Rebel lineup that has struggled the past two weeks. Maybe it’s a one game blip on the radar. We’ll know more when the Rebels leave Hoover, Alabama this week.

Losing two of three in Knoxville, paired with LSU’s series win over Auburn and Texas A&M’s series win over Arkansas, Ole Miss locked themselves into the No. 7 seed for this week’s SEC Tournament. The Rebels will play a single-elimination game Tuesday against Missouri. Ole Miss will start Will Ethridge (5-6, 3.16) and will likely go against arguably the SEC’s best pitcher in T.J. Sikkema (7-4, 1.32 ERA). Winning on Tuesday would move the Rebels into the double-elimination portion of the tournament against Arkansas.

A team that struggled tremendously down the stretch, losing six of their final seven regular season games, getting that win Saturday in Knoxville before the postseason is huge. Falling to No. 30 in RPI after the Tennessee weekend, hosting a regional is unlikely at this point barring an extended SEC Tournament run. At this point, getting confidence back and finding a steady batting order and bullpen rotation is likely more important.

In the regular season, Ole Miss lost two of three games during a march trip to Missouri (but they did win two of three against Arkansas). Interestingly, the game in Columbia against T.J. Sikkema was the only Ole Miss win that weekend. Doug Nikhazy pitched arguably his best game of the year in the game, giving up just two hits in 7.2 innings of scoreless work. The Rebels won the game 3-0.

As important as any single game is in SEC play, now the stakes are significantly heightened. For Ethridge, the Rebel Friday night ace hasn’t exactly been an ace the past month. Ethridge is 1-4 with a 4.91 ERA over his last five starts. The numbers aren’t terrible, as all five of those schools faced are inside the RPI top 21 currently. But he’ll need to be better Tuesday against Sikkema.

For Ole Miss, more questions linger in the bullpen than on with the starters entering postseason play. A perceived strength in the middle of the season, the bullpen has been shaky at best the past few weeks. In fact, in a 5-4 game on Saturday that Ole Miss desperately needed, it was Ryan Olenek that they called upon to get the final three outs. Olenek, primarily a center fielder, hadn’t pitched since April 2. Regardless, he threw a perfect inning using just 12 pitches in the win. In fact, he’s actually given up just one run over five appearances (and five innings pitched) this season.

While it’s mainly a team flaw right now, Ole Miss really needs more from Austin Miller. Just one month ago, the junior’s ERA was just 1.51. Now, Miller is up to 2.89 and has allowed five runs in his last 3.2 innings on the mound. During his only appearance in Knoxville to close the year, he walked three of the five batters he faced.

Recent struggles aside, Ole Miss still arrives in Hoover on Monday afternoon as the defending champions of the SEC Tournament looking to defend their crown. Ole Miss plays in the second game Tuesday at around 1 p.m. All SEC Tournament games are televised on SEC Network.