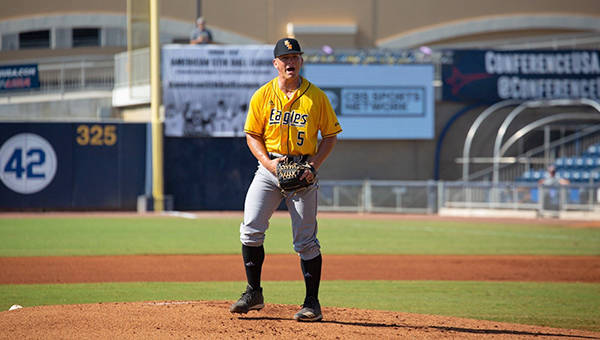 Gabe Shepard, Cody Carroll and Hunter Stanley combined on a no-hitter — Southern Miss’ first in 15 years and the first in the 23-year history of the C-USA Tournament — as the Golden Eagles beat Rice 6-0 in the semifinals at MGM Park.

It was the seventh no-hitter in Southern Miss history, and first since Cliff Russum threw one against Eastern Illinois on March 13, 2004.

Shepard, a freshman right-hander, had 12 strikeouts and only walked one batter. He left in the eighth inning, to a standing ovation from the predominantly Southern Miss crowd, after throwing 91 pitches.

“It’s something different. I’ve never experienced that. That was totally different than anything I’ve ever experienced. I was in a total different zone with the fans behind me,” Shepard said. “I felt like I was on a different level than anyone else. There is no one else around you. All I hear is yelling and I am focusing in on the catcher. I’m not really worrying about the hitter. It’s just one of those days.”

Southern Miss (37-19) is in the championship game for the fourth year in a row, and ninth time overall. It will go for its third conference championship in four years when it takes on Florida Atlantic or UTSA Sunday at 1 p.m.

The championship game will be televised on CBS Sports Network.

Southern Miss needs to win the Conference USA championship to reach the NCAA Tournament for the fourth year in a row.

Southern Miss is now 13-4 all-time at MGM Park, which opened in 2015. It is 11-3 in C-USA Tournament games there and has not lost yet in this year’s tournament.

“Consistency, which is something that we haven’t had a lot this year, we’ve had over the years here,” Southern Miss coach Scott Berry said. “We are looking forward to it.”

For a while, though, the Golden Eagles will revel in Shepard’s performance. The freshman from Mobile had only appeared in 10 games this season, and hadn’t pitched since throwing five shutout innings against Troy on May 14.

He was almost perfect on Saturday.

Shepard retired the first 15 batters he faced before giving up a leadoff walk to Justin Collins in the sixth. He then retired the next 10 batters and left after Cade Edwards grounded out to start the eighth.

Collins wound up being Rice’s only baserunner of the game. The closest the Owls (26-33) got to a hit was one batter after Shepard left. Rodrigo Duluc hit a ball to the gap in left center field that Gabe Montenegro snagged with a diving catch.

“What (Shepard) did was just incredible, especially for a freshman. He had his stuff, and it’s so fun to catch, so easy to catch,” Southern Miss catcher Cole Donaldson said. “I mean, I can’t draw it up any better than that.”

Berry and Shepard said the decision to pull him with the no-hitter intact was about Shepard’s health. Shepard is coming off of arm surgery last year and hadn’t thrown more than five innings in a game this season.

“Today, the decision to bring him out of there was about the future, nothing more,” Berry said. “Obviously, if his pitch count wasn’t up there, and by normal standards by a starter, it probably wasn’t up there. But a young man who hadn’t gone more than five innings one year removed from surgery, sometimes just like you have to be the parent with your own kids and make the best decisions for them, whether they like it or not, you do the same thing as a coach.”

Wallner and Bowen hit back-to-back solo home runs in the seventh inning, and Danny Lynch added an RBI single later in the frame to stretch USM’s lead to 6-0.

“The biggest thing, going into the top of the seventh inning, it was time to put a crooked number on the board, because three runs in this park is not much,” Berry said. “We were letting them hang around, so our ability to go out and go back-to-back dingers and then add a two-out run, that was really big.”