Rebels power past Jacksonville State to start their Oxford Regional 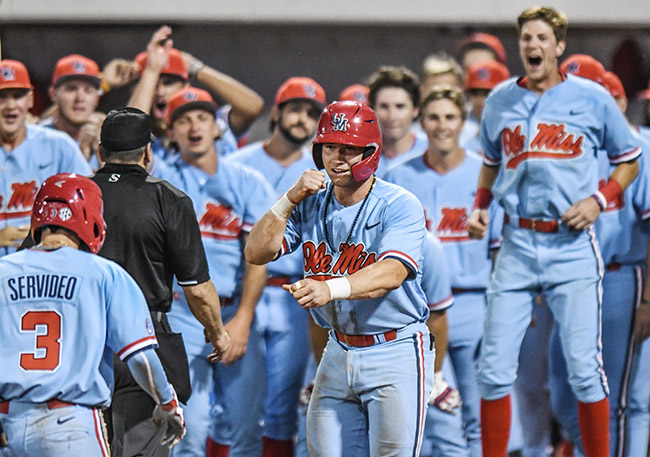 Mississippi's Cooper Johnson and the rest of the team welcome Anthony Servideo to the plate after Servideo hit a two run home run against Jacksonville State in the NCAA Oxford Regional at Oxford-University Stadium in Oxford, Miss. on Friday, May 31, 2019. (Bruce Newman, Oxford Eagle via AP)

OXFORD – Students in right field didn’t have to wait long to celebrate the announcement of the SEC’s new alcohol policy with a few beer showers of their own.

Despite falling down 1-0 early, the Ole Miss offense had its way with Jacksonville State on Friday night. Winning 16-2 to start their run in the Oxford Regional, the Rebels got it tonight from both the bats and the arms.

Going against the Jacksonville State ace Garrett Farmer (5-2, 2.56 ERA), Ole Miss’ quality of competition in the SEC compared to the Ohio Valley Conference was evident. The Rebels got on top of Farmer early, scoring in four of the first five innings and hanging ten runs on the Gamecocks’ best arm. The ten runs allowed was more than Farmer had allowed in his prior four starts combined.

As for the beer showers, Tyler Keenan hit a ball a country mile in the third inning to put Ole Miss up 4-1. In the fifth, it was an unlikely name – Anthony Servideo – going deep to right field to cap a five-run inning. Servideo’s homer, just his second of the year, put the Rebels up 10-1. In the seventh, it was Thomas Dillard doing his part with yet another long ball to cap yet another five-run inning.

“As much as coaches speak and we talk about quality at bats and grinding it out getting base hits, everyone likes home runs,” said head coach Mike Bianco.

“I felt great. I knew I was going to play in the game. There’s no way I was going to miss it,” Keenan said. “That ball off the bat felt really good.”

As much as they were hitting for power, Ole Miss was getting everything to work offensively. The three Rebel homers accounted for just six of the Rebel runs on the night, yet every starter reached base and nine different players recorded a at least one hit.

On the mound, Will Ethridge (7-6, 2.91 ERA) was everything you would want from an SEC Friday night starter going against a mid-major. After giving up an opening-batter double that led to a first-inning run, Ethridge retired the next 20 Gamecocks faced. The Rebels would get seven full innings out of Ethridge, allowing just three hits to Jacksonville State totaling two runs.

“Will was terrific tonight, maybe as good as he’s been all year,” Bianco said. “Just sensational by him, and of course the offense continued to add.”

The plan was sound. Ethridge had already gotten a little off his normal rhythm by pitching some in relief this past Sunday against Vanderbilt. Now, he’s back to his normal Friday night ways and setting the Rebels up perfectly for the weekend. He turned the ball over to Taylor Broadway in the eighth to finish the game. After one game in the Oxford regional, Ole Miss has used just two pitchers and none of their typical top bullpen arms. It’s a great way to set up a weekend of NCAA Tournament baseball.

“I was running out to take the field and I got chills,” Keenan said. “(Fans) showed up for us and we showed up for them tonight. Now we just have to keep it going.”

Next up for Ole Miss is Clemson. The Tigers beat Illinois 8-4 earlier on Friday to kick-start the Oxford Regional. Doug Nikhazy will be on the mound for Ole Miss in the game that starts at 6 p.m.