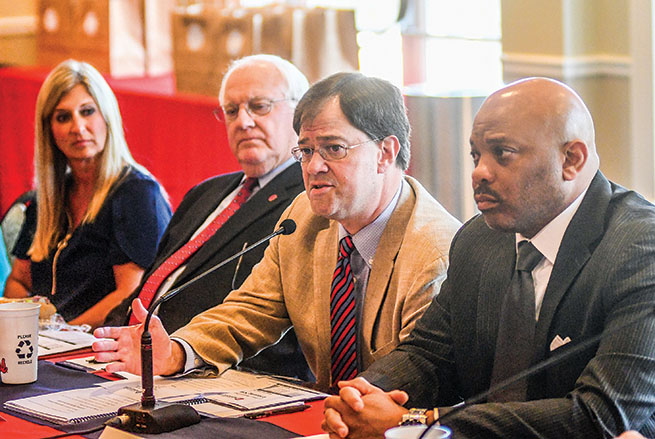 Dr. Ford Dye, second from right, chairman of the Campus Search Advisory Committee, which is tasked with helping find a new chancellor for the University of Mississippi, speaks at a meeting at the Inn at Ole Miss, in Oxford, Miss. on Friday, June 14, 2019. (Bruce Newman, Oxford Eagle)

The 39-member Campus Advisory Search Committee that was charged with helping in the search for the University of Mississippi’s next chancellor held its first meeting on Friday. The committee met at the Inn at Ole Miss in what was mostly an organizational meeting in structure but also began laying the groundwork in the criteria they will be using in their search.

At the start of the meeting committee members took the time to introduce themselves, provide a background and give a brief explanation of what they are looking for in the university’s next leader.

Members of the search firm Buffkin-Baker were also in attendance. The Nashville-based firm will be assisting the committee in handling the chancellor search.

“I think you have defined what a leader is,” Tannehill said after listening to each committee member. “Numerous people have used that word ‘leader’ but you have also given the qualities that you are looking for in that leader. I think you’re right. I think we need someone who can tell the story, who understands Mississippi and is passionate about our story and about this place and about our people. But, can share that story.”

Many of the committee members expressed similar interests in what they were wanting in the next chancellor; someone who understands the university’s past but also its future. Fundraising was also a key concern that was emphasized by former Ole Miss football player and committee member Todd Wade who noted university donations have decreased in recent years and would like to see that improve.

“I think we should be looking for someone who appreciates the balance between who we’ve been and who we need to become in order to thrive going forward,” committee member Markeeva Morgan said. “(Someone) who respects our history but is isn’t bound by it. Who will speak truth to influence and make the right decisions even when they’re unpopular.”

Morgan serves as a University of Mississippi Foundation board member.

At the beginning of the meeting, Ford Dye, chairman of the IHL’s Board Search Committee, announced a smaller group will come from the 39 members that will make up the interview committee. The interviews will be handled at the University of Mississippi Medical Center in Jackson.

When asked by committee member Don Martin on what a salary range would be or if there are limitations on salary, Dye noted they would be offering more than the university has in the past and would be ‘middle of the road’ among other Southeastern Conference universities. Previous Ole Miss chancellor Jeffrey Vitter’s salary was set at $600,000 as part of a pay raise by the state College Board in December of 2015. The College Board approved $300,000 to be paid from state funds and $300,000 from private donations raise by both Ole Miss and Mississippi State University’s foundations.

On Thursday two campus listening sessions were announced by the IHL, giving the Board of Trustees the opportunity to listen to the University community. The first session will take place on June 19 at the UMMC campus. The second listening session will be held at Ole Miss on Sept. 5. Next week’s session will be held in Room R153 in the Research Wing. Oxford’s session will take place in the same room Friday’s committee meeting was held. Both are open to the public with each session focusing on the needs of a specific constituency.

Next week’s session in Jackson will begin at 2 p.m. and will have three separate sub-sessions. A student listening session will take place first followed by a Faculty & Staff session and ending with an alumni listening session. The first two will last 45 minutes with 15-minute breaks in between. The Alumni session will last an hour (4-5 p.m.). Oxford’s session in the fall will feature sessions for academic leaders and staff and include a session where students, faculty and staff can all attend.

“What I want from you is your pledge, as members of this team, that you will put aside your politics, your notions, your negative thinking and help us move this search forward to get the very best result that we can get,” Hussey said to the committee.

Friday’s meeting will be the only one where the entire committee will meet as a whole. Nominations will begin being accepted in July with a list of around eight names being formed following the September listening session in Oxford. Interviews with candidates on the final list are expected to take place in October.