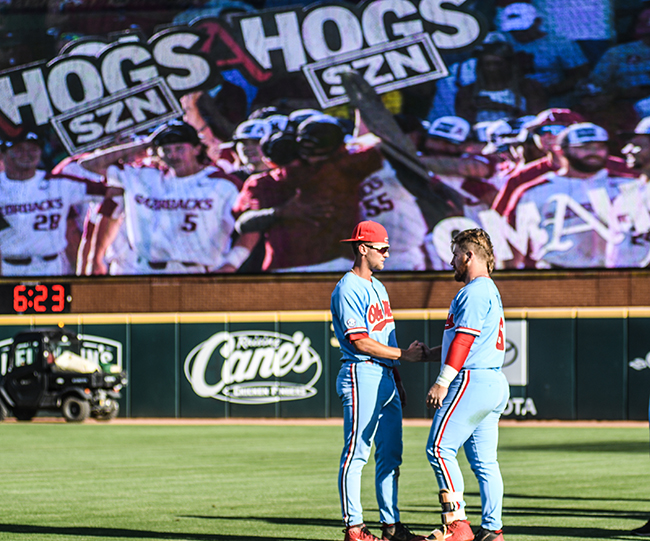 FAYETTEVILLE, Ark. – A decade long run came to a close this past Monday, ending in Arkansas about 400-miles from the northern Mississippi ballpark fields where it all began.

The Ole Miss Rebels played their final game together against Arkansas in the Super Regional, but it wasn’t the normal three- or four-year closure for some. Grae Kessinger, Thomas Dillard and Houston Roth have been playing together since they were in middle school. Now, that run is coming to an end.

“From kids to boys to men,” Kessinger said. “We’ve watched each other grow together. All of our families have gotten so close. We’ve all gotten so close. It’s sad, knowing that we could maybe never be teammates again. But we’re brothers for life and it’s been an awesome journey with them.”

Grae Kessinger and Thomas Dillard started playing summer ball together when they were 11 years old. Their birthdays are three days apart. Now 21, the run is over.

It’s something that goes beyond baseball. Long bus rides and flights together, no doubt. But these are kids whose families have become close. When you hear Dillard speak about his ‘best friend,’ it truly is hard to not get emotional about baseball.

Oxford went 28-8, led by the trio of future Ole Miss Rebels in 2016. They ran through the 5A State Playoffs like it was nothing, losing just won playoff game and beating Hattiesburg 10-0 in the state championship clinching game. Watching those three, and knowing it was far from their peak as athletes, was truly something special.

“In high school, anyone could’ve coached those guys and be successful. I was just blessed to have a front row seat and make sure they got on the bus at the right time and had a uniform to wear,” said Oxford coach Chris Baughman. “But it’s been really exciting to see three of your guys be as successful as they’ve been. It’s my first three kids that have had the opportunity to go pro… I don’t know if I made them any better but at least I got to be around them and help them grow up a little bit.”

Going from playing at Oxford’s Edwin Moak to playing Swayze is essentially like transitioning from a dirt backstop park in Brooklyn straight into Yankee Stadium; playing ball for Mike Bianco at Ole Miss is the dream for kids growing up in Oxford playing baseball. And the trio of best friends from high school got to do it together.

The trio won 121 baseball games together in an Ole Miss uniform, capped by their first trip to an NCAA Super Regional in their final year together.

It took a little while for the moment to sink in at Fayetteville on Monday. Dillard and Kessinger met out in left field after the final outs, a handshake and a hug to end their final moments wearing the Ole Miss logo across their chest. Kessinger described it as the most emotional and toughest moment he’s had on a ballfield.

Kessinger, a second-round pick of the Houston Astros, is expected to be introduced in Houston over the next few days. Dillard, a fifth-round pick by the Milwaukee Brewers, announced his departure on Twitter earlier this week. Roth was also drafted, a 29th round selection by the Baltimore Orioles, but has not publicly made his decision yet. Of the three, he was always the most likely to return to Ole Miss.

Regardless of Roth’s decision, it’s the end of an era at Ole Miss and in northern Mississippi baseball. The three will always keep in touch. But moving forward it will over the phone, hundred miles apart – not from across the locker room somewhere in Oxford, Mississippi.

“You got to really watch these guys grow up as men and players. You see all the hard work they put in for years and years. For it to all work out like it has, those kids deserve it more than anyone,” Kessinger said. “It’s just awesome to be at the point in our lives and be a part of this journey with them and for it to end and play professional baseball. That’s the dream – to see that journey through with your best friends.”