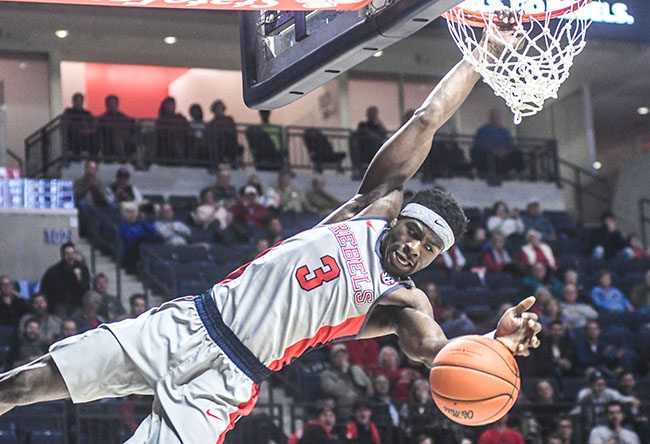 From the time the college season ended up through the first set of NBA Summer League games in Las Vegas, former Ole Miss guard Terence Davis has been one of the most consistently productive players on the circuit. Teams are finally showing him the checkbook.

Davis held out from signing two-way contracts early, ultimately the reason he fell out of the second round of the NBA draft. Instead, he signed an NBA Summer League contract with the Denver Nuggets. Now, he’s full-time on an NBA roster. Terence Davis bet on himself, and he won.

Toronto gave Davis a two-year contract, fully guaranteed in year one. Unlike the two-way contracts Davis was offered later in the draft, which allow teams to rotate players between their NBA roster and G-League roster, the contract Davis signed with Toronto will keep him with the NBA Raptors full-time.

Raptors and general manager Masai Ujiri wasted no time seeing Terence Davis and getting him under contract. In his first NBA Summer League game with the Nuggets, Davis went off. He scored a game high 22 points, doing so with remarkable efficiency. Davis shot eight of thirteen from the field, hitting five three pointers, grabbing five rebounds and dishing out three assists. It landed him his first NBA contract.

Truly, it’s not the first time Davis has had a “bet on yourself” mentality. Coming off his junior season at Ole Miss, where he averaged 13.8 points, Davis dipped his toes in the water of the NBA draft. Ultimately, he decided to return and play for new head coach Kermit Davis. That decision certainly paid off as well, as Davis upped his scoring to 15.2 points and shot 3.7 percent better from the field. Most importantly, Davis’ three-point shooting got considerably better his senior year as well.

Now, Davis will get a legitimate chance to contribute right away in the NBA. Despite winning the NBA title just a few weeks ago, the Raptors are in full rebuilding mode. The team lost finals MVP, and arguably the best player in the world, Kawhi Leonard, leaving behind an aging and frankly not very good roster. It’s a good position for Davis to work his way into playing time early in his NBA career.

Terence Davis bet on himself, again. And yet again, he came out victorious on the other side.

What Vegas win totals say about the upcoming Ole…