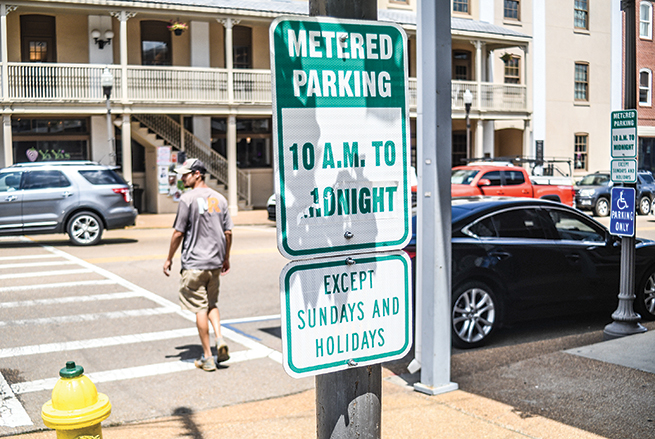 The Oxford Planning Commision is calling for less signage around the Square, in Oxford, Miss. on Tuesday, July 9, 2019. (Bruce Newman, Oxford Eagle via AP)

Members of the Oxford Planning Commission feel there are several redundancies when it comes to signs posted on the Square, and would like the city to look into the issue.

During Monday’s regular board meeting, chairman Brian Hyneman discussed the amount of signs in close proximity of each other regarding the same topic.

“I think the Historic Urban Center, which is the Square, has a lot of redundant signage that can be moved and can be lessened,” Hyneman said.

Hyneman proposed the idea of the commission asking the Oxford Board of Aldermen to form a committee to look into ways of limiting the number of signs and lessening their impact on the Square. When asked by commissioner Marvin King what the process of making recommendations would be, Hyneman said the committee would make recommendations directly to the Board of Alderman for their consideration.

What gave Hyneman cause for concern was locations on the Square that have multiple parking signs or metered parking signs that are similar in nature and are in close proximity to one another. Limiting the number of those signs in one area is main issue Hyneman said he would like the committee, if formed, to look at.

“The area that goes in front of City Hall and Neilson’s Department Store, there is a sign on a pole that says ‘metered parking’, the times, and this, that and the other. If you go south three more poles there’s another sign that says metered parking and has the same thing,” Hyneman said. “What I suggest, if the committee so chose to do so, you could move the sign from their current existing places and, as I was saying, it seems obvious to put one sign on the center parking meter. There are parking meters there. You can go and you can understand probably what you need to do.”

Another example Hyneman gave was yellowed-out area near City Hall on Jackson Avenue East that is striped for no parking while also having three signs saying ‘no parking’ as well. City engineer Reanna Mayoral stated that several of the excess signs are due to enforcement and that they must have a yellow-painted curb and a sign posted.

The proposed committee being asked by the planning commission to form could have a member from several commissions including the Planning Commission, Board of Aldermen, the Code Enforcement and others.

The commission did not take a vote, but asked to have the proposed committee be brought before the Board of Aldermen at a future meeting for consideration.

One dead in Taylor trench collapse