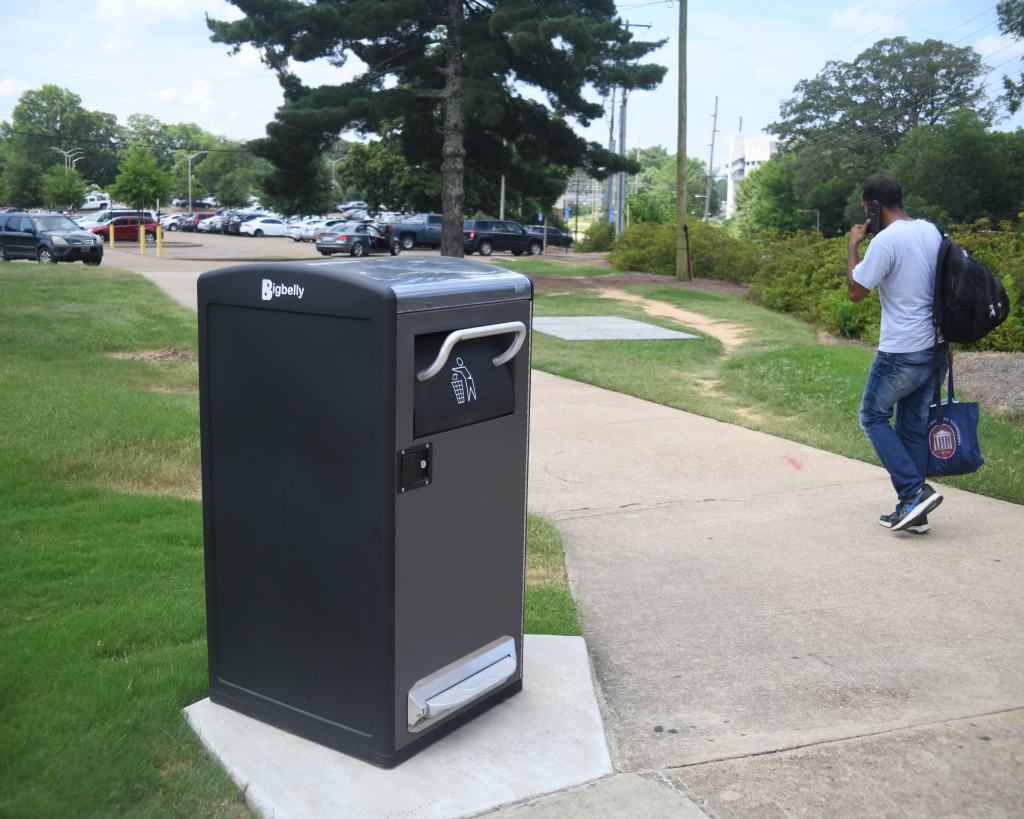 Ole Miss is taking its waste management into the 21st century.

Earlier this year, solar-powered trashcans were placed throughout campus in an effort to be more efficient with trash collection services.

The school purchased 25 Bigbelly trashcans in two different styles. One is a compacting can that is a solar compactor, of which the University has 12, and the other is called a “Smartbelly,” of which the school has 13. The Smartbelly cans work off computer software that will communicate when they are full, or near capacity, via an email or through a notification on a smartphone.

The hi-tech trashcans were purchased last fall and were installed during the spring semester. The upcoming fall semester will be the first full semester the cans will be utilized. They have been around campus throughout the spring and summer months, and are already proving their worth according to Assistant Superintendent of Landscaping services Nathan Lazinsky.

Groundwork to get the solar-powered trashcans began being laid down four years ago. Ole Miss did their research and talked with other universities who were already using the Smartbelly cans. Georgia, South Carolina and Arkansas State University are some of the schools that have them on their campuses.

The Smartbelly cans are placed in remote locations, such as Rowan Oak or Insight Park, where there is not much traffic or the need for frequent trash collection. The Bigbelly cans replace up to four regular trashcans in one area on campus. Prior to installing the new cans, someone would have to drive over to Rowan Oak three to four times a day to check the trashcans. Now, they are alerted when a can is full.

“What we’re trying to do is save time so we’re using technology to our advantage,” Lazinsky said. “We’re putting (Bigbelly cans) in high profile areas that we’re having to dump three or four times a day. Now, we put them there and maybe have to dump them once a week.”

The sample size is small, so the once-a-week average of collecting trash from the Bigbelly cans could fluctuate once school resumes and the campus is running at full capacity. This will mark the first football season where the trashcans will be utilized, which could cause Lazinsky and his staff to reassess where the cans are located or the frequency in which they are emptied.

Another aspect in installing the trashcans is that it allows the smaller staff within the landscaping department to spend their time more wisely and devote less time to driving around all day collecting trash. There are usually three to four people on sanitation duty, with one driving the garbage truck and others running the garbage route where they empty the green trashcans that already exist on campus.

“What we’re trying to do is get us more efficient,” Lazinsky said. “We run a really lean staff. Campus is growing, enrollment is growing and so we’re trying to look at ways to be the best stewards we can with the money we have. We’re hoping with (the trashcans) it would take the place of a person. …So far from what the sanitation people have said, they are really helpful.”

There are not plans to completely eliminate the original trashcans, but there are plans to cut back with the installation of the new compact trashcans. Each can has a small battery that is similar to a motorcycle battery and has a shelf life of up to five years. The solar panels have also proven to work in less-than-sunny conditions, including having snow on them or even near areas with shade. Before they were installed, the cans sat in storage for a couple months and worked perfectly despite the lack of sun prior to putting them in operation, Lazinsky said.