Matt Luke has a plan for freshman utility back Jerrion Ealy 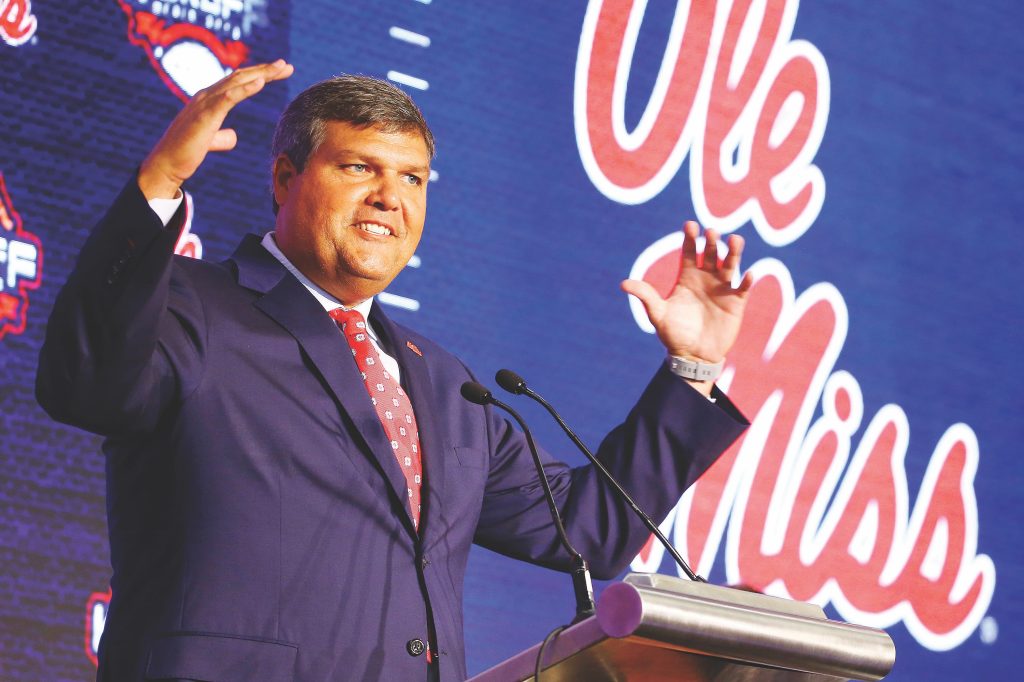 HOOVER, Ala. – When Ole Miss football released its two-deep depth chart last week ahead of the opening of fall camp, there was a notable omission.

The top player in the Ole Miss recruiting class, five-star running back Jerrion Ealy, wasn’t listed. But make no mistake about it, Matt Luke and the Rebel staff have a plan for the dynamic freshman.

“He’s obviously a very talented guy, a guy that we’re excited about and our fans are all excited about,” Luke said. “He’s a talented guy, but the thing that’s unique about him is he can do so many different things. He can line up in the slot or lineup in the backfield and catch the ball out of the backfield and run speed sweeps. There’s so many things with a guy like (Ealy) that you can do. We’re looking forward to finding a way to get him the ball in space.”

Ealy won’t be the Rebels’ starting tailback. That job goes to Scottie Phillips. But, Ealy will certainly play a notable role in the offense. A versatile back that is just as comfortable catching balls as running with it, Ealy will be used out of the slot as a receiver a bunch. He’ll be a traditional tailback at times, too.

Really, his job is to be the change-of-pace guy. It’s similar to a role Alvin Kamara played with the Saints during his rookie year before he became the every-down back he is now. With a player as dynamic as Ealy, coaches don’t want to limit him. Expect to see him a lot as the primary back on third down passing situations and then as a freelance, “Swiss army knife” in early-down situations. In fact, seeing Ealy and Phillips on the field together is relatively easy to imagine.

It’s possible he would have a bigger role if he were here in the spring, but the Rebels didn’t know Ealy would be enrolling until this summer. The two-sport athlete was thought of by many as a first-round pick in the 2019 MLB Draft, yet ultimately he decided to come to Oxford. As of now, he’ll be playing both baseball and football for Ole Miss. And he’ll do it as Matt Luke and Rich Rodriguez’s wild card.

“Jerrion loves Ole Miss. He was one of our first commitments in this class. I think he wanted to be here,” Luke said. “Obviously if there was an opportunity that he could take care of his family for the rest of his life, he was going to take it. Fortunately, it worked out for us and we’re fortunate to have him.”

Jerrion Ealy is just one of a number of freshmen who will see playing time. The Rebel starting quarterback, Matt Corral, is a redshirt freshman. All three backups to Corral are true freshmen. The offensive line was one of the most shallow positions on the team before the summer, but then, seven freshman linemen joined the group.

The group is young. There’s no doubt about that. And for the first time in a while, that Ole Miss’ young group has a full compliment of 85 players. The new offense is potent, and Ealy will be one of a few exciting, potent members that define it.

“I was really impressed with Rich (Rodriguez) the way he installed an attitude and an edge. I think that will be the key to this offense. It’s going to be young, but I think it will be dynamic and it’ll be fun to watch,” Luke said.

Ealy’s usage may ramp up as the season goes on. But for now, he’s behind both Phillips and Isaiah Woullard on the depth chart. He may be the prized jewel of the 2019 Rebel recruiting class, but for now he’s just another one of the freshman that will see some playing time, but not starter-type snaps.