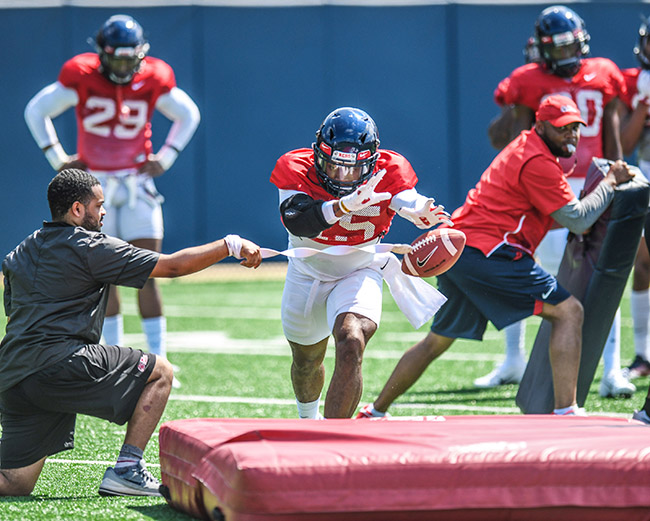 Ole Miss football held day two of open practice on Monday morning, our second opportunity to see what the new-look Rebels will be as the 2019 season quickly approaches. Below are some quick takeaways from observing what we are allowed to watch from the Ole Miss practice.

1. First look at the First-Team defense

The big news of the day is that Ole Miss showed its hand defensively for the first time since practice opened. Below is the full defense.

We got our first look today at the #OleMiss first team base 3-4 defense (for now) pic.twitter.com/9UOlDlQZSN

For the most part, it’s what we expected. It’s nice to see that Sam Williams has impressed the coaches enough in the fall to be part of the first team. But that’s what you want with a junior college player ranked as highly as Williams. Perhaps the biggest surprise is that senior defensive tackle Josiah Coatney wasn’t with the first team… or the second team. He was with the third team. Second team nose tackle reps went to sophomore Sincere David.

2. Ole Miss will certainly be in shape come Memphis

The most noticeable difference in the offense (and defense for that matter) is how fast practice moves. There’s no wasted time in between reps and everything is moving at a really fast pace with almost no time for breaks. It’s hard to imagine this team will be out of shape – or even in average shape – come the start of the season. And when the opening game is played at Memphis in the middle of the day, being in great football shape will be a huge factor come the fourth quarter.

3. Rebels will run out of any look

Ole Miss used just about every personnel grouping in Monday’s practice. Primarily, the team will be in 11 personnel (one running back, one tight end and three receivers). But at the same time, they ran plays out of 12 personnel (an extra tight end and just two receivers) and 10 personnel (no tight ends and four receivers). That’s not all that surprising for most teams. But the interesting thing is that, even when there were four receivers on the field, the team was running a lot. It’s going to be an entirely shotgun based offense. The only time they lined up under center was when they shifted to under center and ran a quick quarterback sneak.

Around the SEC: Georgia