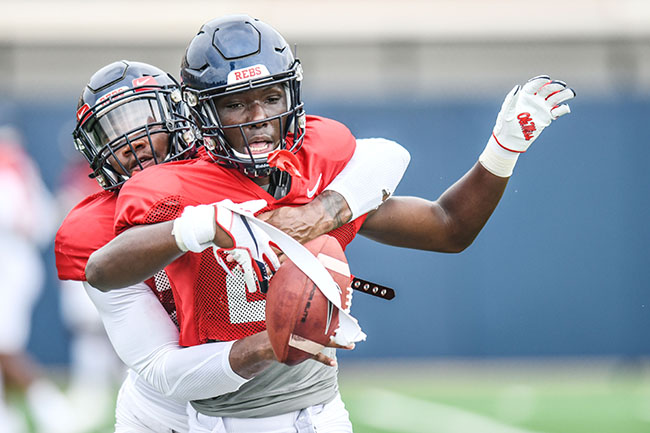 Ole MIss defensive back Armani Linton, left, knocks the ball away from A.J. Finley during a drill at football practice in Oxford, Miss. on Friday, August 9, 2019. (Bruce Newman, Oxford Eagle via AP)

Ole Miss football held day four of open practice on Friday morning, marking the media’s fourth opportunity to see what the new-look Rebels will be as the 2019 season approaches. Due to some thunderstorms in the area, the practice was half-outside, half-inside to end the week. Below are some quick takeaways from observing Ole Miss practice.

During open portions of practice on Wednesday, tight end Jason Pellerin left practice after suffering a head injury. We did not see the actual injury take place, but Pellerin was not out there to practice on Friday. He is reportedly in the concussion protocol and is out indefinitely until he passes it. The Rebel tight end room doesn’t have a ton of depth, with Pellerin and Octavious Cooley splitting first-team reps throughout practice so far. With Pellerin sidelined, Nick Haynes was getting second reps at the tight end position. More realistically, if he is to miss serious time, the offense would likely just run more four-receiver looks.

On the defensive side, Jon Haynes was also not on the field, nor was Qaadir Sheppard. Both have been starting on the first-team offensive line for the Rebels. Ole Miss confirmed Shepard is out 10 days with a hand injury. The team would not comment further, but it is believed Sheppard broke his hand on Thursday. Haynes is day-to-day with a ‘lower body’ injury. Additionally, senior defensive back Montrell Custis is still not participating in full-contact practice, recovering from a knee injury suffered last fall.

Scouts from the Baltimore Ravens, New Orleans Saints and San Francisco 49ers were at practice on Friday. Myles Hartsfield, the Ole Miss No. 1 cornerback, seemed to be the name drawing most attention and inquiry from the scouts while talking to the Rebel coaching staff. For reference, Hartsfield is not listed in the top 32 draft eligible cornerbacks according to WalterFootball.com, regardless, there was much inquiry about the Rebel senior. Hartsfield was a freshman All-American and has since started just about every game over the course of his sophomore and junior seasons. Among others drawing interest from the scouts included Jaylon Jones, Willie Hibbler and Qaadir Sheppard.