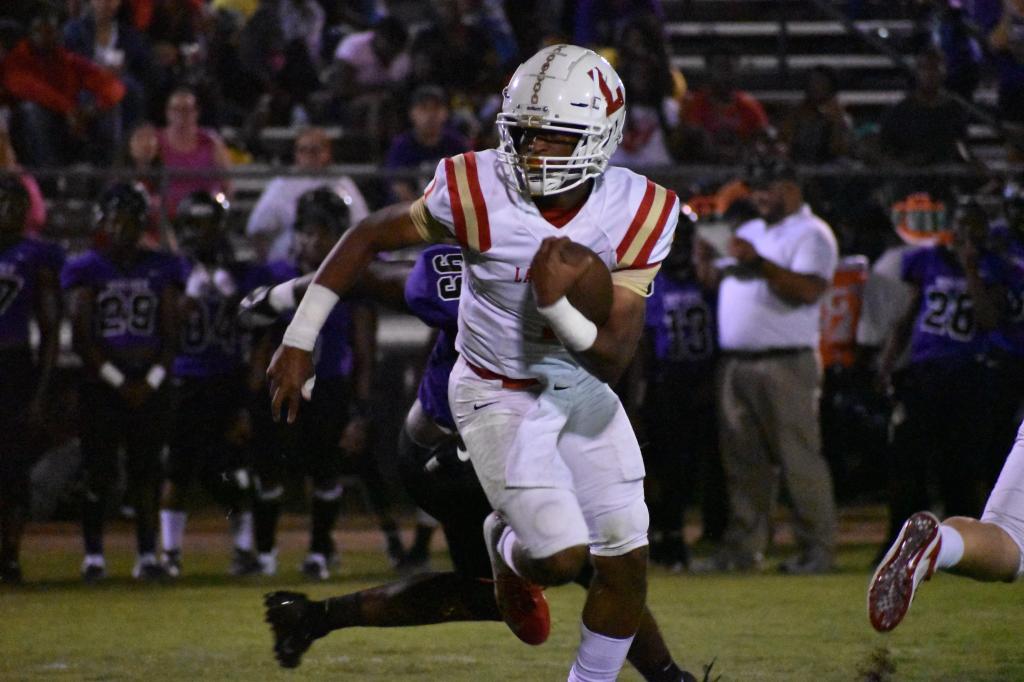 Sophomore quarterback Tyrus Williams carries for a big gain in the first quarter of Friday night's game at Cleveland Central. Williams made his first career start in the game. (Nathanael Gabler, Oxford Eagle)

CLEVELAND – A slow, methodical Cleveland Central drive came to a halt with 5:23 to play in the first quarter.

In nine plays, they had moved the ball just 38 yards, all on runs.

Then came the lightning. The game was delayed one hour and 17 minutes before Lafayette came back and took control of the game. A scoreless game at the start of that lightning delay, the Commodores took control quickly, pulling away for a 34-14 win to open the season.

Immediately following the delay, Lafayette made the game-changing play that set the tone. Cleveland Central decided to go for it on fourth and three from around mid-field and the Commodore defense held strong. Turnover on Downs. The Commodores immediately took the ball right down the field for the opening touchdown of the game.

Tyrus Williams, the sophomore making his first start at quarterback, was the offensive catalyst for Lafayette when they needed it. In the first half alone, he rushed for 82 yards, including four carries of over 10 yards. Long Williams runs set up both of the first-half touchdowns for the Commodores, but it was Issac Vaughn and Xzavious Stokes punching in the scores.

Lafayette sophomore QB Tyrus Williams after his first game under center, rushing for 129 yards and a score pic.twitter.com/AVSwLkgHgO

Despite the lopsided final score, the game was close on a play-to-play basis. The difference really came with the little things. Lafayette committed just five penalty in the game, whereas Cleveland Central committed 12. With the ball, driving and inside the red zone, the Wolves fumbled in a handoff exchange. Lafayette’s Matthew Berry scooped up the fumble and returned it 85 yards for a Lafayette touchdown.

“Momentum shifted in a heartbeat,” head coach Michael Fair said. “For him to flip momentum like that and score on defense was huge.”

It was one of three Cleveland Central fumbles that Lafayette recovered, with two more times balls hitting the ground that they recovered themselves and a late interception.

The Wolves made it close, bringing the score to 21-14 with a 28-yard screen pass for a touchdown late in the third quarter, but it would never get closer. Lafayette took control again with two more second-half rushing touchdowns, one by Williams and one by Vaughn.  The Commodores would rush for 238 yards in the game, with Tyrus Williams totaling 129 yards rushing and a touchdown.

“That was the best experience of my life,” Williams said. “I just had a lot of trust in my linemen. They said they were going to leave it open for me and they did that.”

As good as Tyrus Williams was in the run game, he struggled moving the ball through the air. He went just one for six passing and the team didn’t attempt a pass in the second half.

“I thought he grew up a lot tonight. He’s going to be fun to watch grow up,” Fair said. “We just have to get him to throw the ball like he does in practice. Because in practice, he’s really good. I think it’s just a process.”

Defensively, the Commodores struggled in their opener to defend the pass. Brandon Turnage is no longer out there in a Lafayette helmet; it’s a spot the team will simply need to be better at moving forward. They did a good job of keeping the pass in front of them and preventing big plays, but Cleveland Central completed 15 of 20 pass attempts.

With the win to open the season, Lafayette moves to 1-0 for the second straight season. They go back on the road next Friday night for a game at Southaven.