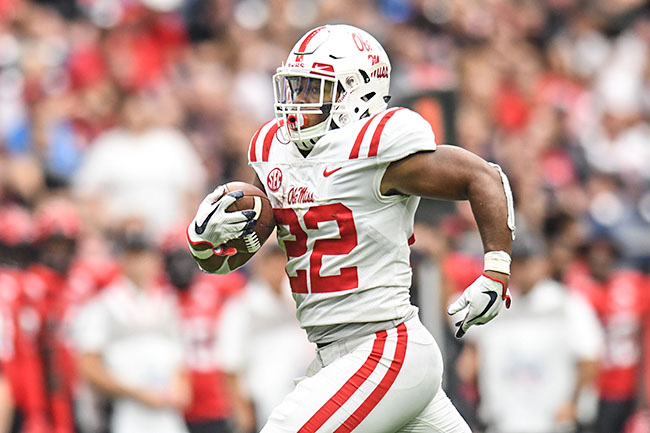 After a summer of uncertainty, Ole Miss football is finally here.

But that doesn’t mean the uncertainty is entirely gone. With all the turnover on the roster and coaching staff, and the fact that they’ve closed off all their scrimmages and a good portion of practice to fans and media, no one really knows what this team will look like. If you want betting advice going into the Rebels’ opener at Memphis, here you go: don’t. It’s a wildly unpredictable situation entering week one. However, this opener will tell us a lot about the roster and what they want to do. These are the eight things I’m questioning most about the Rebels in week one:

1. How much will Rich Rodriguez run Matt Corral?

Rich Rodriguez likes to run his quarterback. He likes to talk about making the defense defend all 11 players on the field, which is a little silly because there’s no need to defend a left guard. The point is, he wants defenses to have to account for the quarterback when the team is rushing. Corral is a little different than some of the guys Rich Rod has had in the past. Recruited as a pro-style quarterback, Corral is probably a better passer than he’s ever had at the position, but he’s not as good of an athlete as, say, Arizona’s Khalil Tate. All said, Corral reportedly ran a 4.80 40-yard dash in high school, which makes him fast enough to be a rushing threat. It’ll be interesting to see just how much he’s used in that regard.

2. How effective will Ole Miss be against the Memphis run and RPO game?

Ole Miss ranked 110 out of 130 FBS schools in their ability to stop the run a year ago. Memphis ranked No. 5 in rushing a year ago. Granted, the Tigers lost 2,200 scrimmage yards from running back Darrell Henderson to the NFL and have a new offensive coordinator. But they’re still going to run a lot and use that run-pass-option off the running game. Ole Miss is now in a 3-4 defense with a new defensive coordinator who is putting an emphasis on stopping the run. Mike MacIntrye wouldn’t disclose how they’ll defend that RPO game, but their ability or inability to stop the RPO will likely decide the game on defense for the Rebels.

The Rebels could simply not rush the passer in 2018. Ole Miss recorded just 22 sacks over the entire season, dead last in the SEC. Enter Sam Williams, the top junior college pass rushing recruit. Williams was recruited to come in and immediately help putting pressure on the quarterback from the outside linebacker position. Since he showed up in Oxford, he’s been working with the ones exclusively. Ole Miss needs his pass rushing ability from day one.

4. Just how fast can the offense realistically run?

If Rich Rod gets his way, Ole Miss will run 80-100 plays per game this year. Just how realistic is that? The lower number is seemingly possible (Ole Miss ran 74.9 plays per game last year), but the higher number is legitimately impossible. Only three teams this decade have topped 90 plays per game and none came close to 100. Running 80 plays in the midday heat of the Liberty Bowl also probably won’t happen, but the thought is there – Ole Miss wants as little time as possible to tick off the clock in-between plays.

5. What will the running back snap count breakdown look like?

The week one depth chart listed four different running backs. All of them will play, the question is how will the snap breakdown look and how often will there be two on the field together. Scottie Phillips is the workhouse, and he’s earned it. Phillips ranked fifth among SEC running backs a year ago in yards per touch (6.34). It would be surprising if he wasn’t on the field the most, yet the other three all have their roles. Isaiah Woullard has big-game experience and Snoop Connor is of the physical, power running mold. Then there’s the true freshman Jerrion Ealy. The plan with Ealy will likely be to use him as a back and receiver, any way to get him the ball in space. How much each is on the field will be really interesting.

Mike MacIntyre’s 3-4 defense will be the base formation, but in modern football the nickel defense (where a linebacker is replaced by an extra defensive back) is on the field as much or more than the base. Against a team that likes to run that RPO previously mentioned, how Ole Miss decides to play those different packages, as well as the dime (yet another defensive back on the field), will be interesting. All this said, defensive back is one of the more shallow position groups on the Rebel team, and linebacker is quite deep.

7. What will the offensive personnel grouping breakdowns look like?

8. How far has Matt Corral come?

In a lot of ways, this is the only question that really matters. Corral is making his first start on Saturday. He played in four games last year, including most of the second half of the Egg Bowl. Now, it’s unquestionably his team. If Corral, a redshirt-freshman, can live up to the hype and promise, Ole Miss has a chance to win seven games and make a bowl. If Corral is merely average, it’s going to be hard to get to that critical six game mark. Rich Rod has a history of cranking out college quarterbacks. The biggest question mark surrounding the whole season, is can Matt Corral be next in that line?